A generous glass of beetroot juice boosts endurance by reducing the amount of oxygen needed during physical exercise, according to a study released Friday.

Subjects who drank the juice easily outperformed a control group in tests and were able to exercise at the same intensity for up to 16 percent longer.


The findings, published in the US-based Journal of Applied Physiology, will be of keen interest to endurance athletes but may also prove helpful to people with cardiovascular, respiratory or metabolic diseases as well as the elderly, the researchers said.


There are essentially two ways to enhance physical performance in relation to oxygen intake.

One is to raise the "VO2-max" level, which is an individual's highest possible rate of oxygen consumption during all-out exercise.

The VO2-max ceiling varies from person to person. It is partly genetic but it can be increased through training or the use of EPO, the oxygen-boosting drug that has plagued the Tour de France cycling competition as well as other professional sports.

"But there is an alternative," explained Andy Jones, a professor at the University of Exeter in Britain and lead author of the study.

"If you can reduce the energy cost" -- the amount of oxygen used -- "that can be beneficial too," he told AFP by phone.

That's where beetroots come in.

In experiments, Jones and colleagues asked two groups of people to exercise at a fixed, high-intensity work rate for as long as they possibly could.

The group that drank a red-coloured placebo held out on average for nine or ten minutes. Those who drank beetroot, however, went 11 or 12 minutes.

"They were exercising at exactly the same work rate. The improvement in performance was not because the VO2-max had changed but simply because the efficiency had been enhanced," Jones said.

"We were amazed by the effects on oxygen uptake because these effects cannot be achieved by any other known means."

Whether the juice will also work over several hours of less intense exercise -- equivalent to long-distance running or cycling -- remains to be shown but seems likely, Jones added.

The researchers are not sure exactly how the ruby-red elixir works but they do have an educated guess.

Like lettuce and spinach, beetroot is rich in nitrate, which the body converts into nitrite. This, in turn, is a chemical trigger for another compound, nitric oxide.

Nitric oxide can dilate blood vessels and thus provide more oxygen to muscles. "But we think the key is that it seems to do a lot of weird and wonderful things within the muscle cells' mitochondria, where oxidated energy is produced," Jones said.

Earlier laboratory studies confirm the link between nitric oxide and increased energy output but further experiments are needed to see whether this truly is the magic ingredient.

Another study, published last year in the US journal Hypertension, found that beetroot juice reduces blood pressure too.

Keep Summer Swimming and Stamina Events Safe
Whether having fun, staying in shape or pushing your physical capacity to the extreme, the summer is a great time to enjoy your physical health and move more.
READ MORE 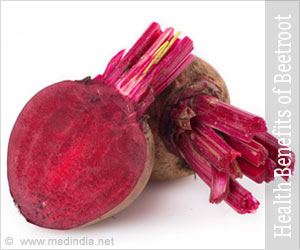 Beetroot Saga
Beet contains the antioxidant betacyanin and is a natural source of nitrate which makes it a super food which needs to be consumed on a regular basis.
READ MORE