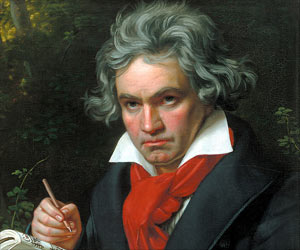 Ludwig van Beethoven composed some of the most famous work of all time by following his 'irregular heartbeat', according to a team of researchers from the University of Michigan and University of Washington.

The researcher team that includes a cardiologist, medical historian, and musicologist analyzed rhythmic patterns of several of Beethoven's compositions for clues of cardiac arrhythmia, a condition that causes the heart to beat too fast, too slow, or with an irregular rhythm. They found that sudden, unexpected changes in pace and keys in Beethoven's renowned works appear to match the irregular rhythms of Beethoven's own heart caused by his heart condition.

Beethoven has been linked with several health problems including inflammatory bowel disease (IBS), Paget's disease (abnormal bone destruction), liver disease, alcohol abuse, and kidney disease. The authors said that deafness was his most often described ailment, which possibly could have heightened his other senses and made him even more aware of his heartbeat.


The study has been published in Perspectives in Biology and Medicine.