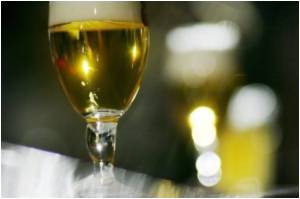 The non-alcoholic beverage is made with beer ingredients of malt and hops, but also includes meat extract.

A new study suggests that beer drinkers are most likely to drive drunk and get involved in driving fatalities than wine or scotch drinkers.
Advertisement

Although the dogs seem to have a thirst for the drink as 'The Brandling Villa' in South Gosforth had to reorder fresh stock after the first 48 bottles ran out in a fortnight, but ironically, manager Dave Carr's own dog, beagle Franco, did not like it.


"It tastes of beef," the Daily Mail quoted Carr as saying.

"I don't want to give it to my dog without trying it first. It's pretty revolting and my dog doesn't like it but I've got enough people who drink my stock so it's nice if my dog doesn't join in.

High Levels of Gluten Found in Some 'Low-Gluten' Beer

Some beer brands labeled low-gluten, contain levels of hordein, the form of gluten present in barley, that could cause symptoms in patients with celiac disease (CD)
Advertisement
"Everyone else's dogs love it. We have some regulars: she'll have a Sauvignon Blanc, he has a pint of Budvar, and Charlie the dog has a dog beer. That's his regular drink."

Carr revealed that the pub keeps the 'dog beer' along with other beers in the fridge.

"People seem to think it's a bit mental - we keep it in the fridge along with other beers and they ask what it is. People think it's just a normal beer with a ridiculous name."

"I scoped the internet looking for ridiculous stuff, and we became dog-friendly. There aren't many pubs you can go to with your dog.

"The dogs were drinking water and eating biscuits, so we also created a dog menu, designed for dogs but based on traditional English dishes," Carr added.

Dogs Intuitive to Our Intent to Commune With Them as Kids

Apart from picking up words we say dogs can comprehend our intent to communicate with them, claims a new study.
Advertisement
Advertisement