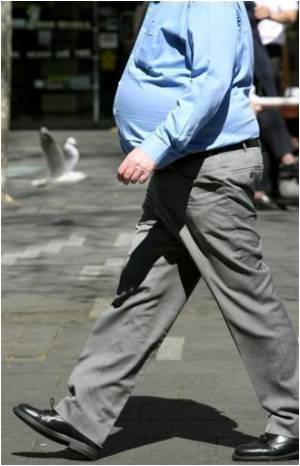 People with beer belly or a "muffin top" are at increased risk of developing bowel cancer, according to a study.

A shocking study revealed that for every inch above a healthy waist measurement, the likelihood of the fatal disease rises by three per cent.

While the link between excess fat and the chances of bowel cancer is known but the new study provides the strongest evidence so far that waist size is a significant contributing factor.


According to researchers, even slim people whose weight is normal are still at risk if they carry a bulge.

They say a healthy waist measurement is less than 31.5in for women, less than 37in for white and black men and under 35in for Asian men.

A list of Must Know Top 12 Cancer Facts of the World.
Advertisement
Scientists have recommended that people should try to stay as slim as possible without becoming underweight.

They estimate this could prevent more than 2,700 cases of bowel cancer in the UK every year.

"As well as confirming the link between body fat and bowel cancer, this study has strengthened the evidence that where we carry the fat is also important. This means that people with large waists should try to lose that flab even if they are otherwise in the normal body mass index range," the Daily Express quoted Professor Martin Wiseman of the World Cancer Research Fund, which paid for the study, as saying.

"In fact, scientists now say that, after not smoking, maintaining a healthy weight is the most important thing for cancer prevention," he added.

Experts at Imperial College London and the University of Leeds reviewed seven research papers, all of which showed tummy fat as a predictor for bowel cancer.

Dr Teresa Norat, lead researcher, said: "This study indicates that people should pay attention to abdominal fatness even if they are in the normal range of weight and it confirms that being overweight increases the risk of this type of cancer. "More research is needed to understand how abdominal fatness can be prevented."

The results will be presented at an international conference in London.