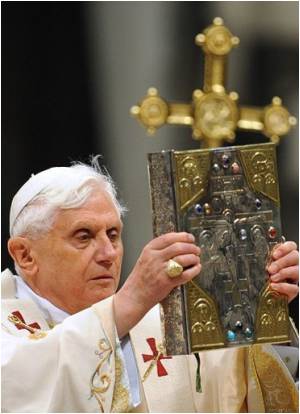 A supposed miracle attributed to Paul VI has been recognized in the Vatican, and beatification of the late Italian pope will be done in October, a Vatican source said Tuesday. This beatification would leave him one step from sainthood.

Paul VI reigned between 1963 and 1978 and presided over key reforms from the Second Vatican Council, as well as surviving an assassination attempt at Manila airport in 1970 by a Bolivian surrealist painter.

The Italian news agency ANSA reported that the apparent miracle identified by the Vatican's Congregation for the Causes of Saints was the healing of an unborn baby from an otherwise incurable illness.


ANSA said the beatification could occur on October 19.

Two late popes, John Paul II and John XXIII, were given full sainthood in a Vatican ceremony last month.
Advertisement
Catholic Church procedures require one miracle attributed for beatification, which confers the status of "blessed" on the person in question, and two miracles for canonisation to join the ranks of saints.

Paul VI was praised for his efforts to seek closer ties with other Christian denominations but his 1968 encyclical Humanae Vitae was controversial for spelling out a ban on all forms of artificial contraception.

The application for beatification was begun in 1993.

Pope Saints Ceremony: Rome Braces for Pilgrim Crowds
The double canonization of popes John Paul II and John XXIII on Sunday is expected to be a historic ...

For Krakow People, John Paul II 'Always' a Saint
The Polish pope's sainthood was celebrated by tens of thousands of pilgrims who flocked to John ......