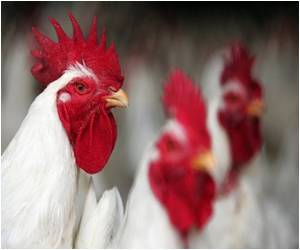 By simply vaccinating chickens against the bug C. jejuni the incidence of food poisoning could be lessened.

If C. jejuni polluted poultry is not prepared and cooked right, the bug can be transmitted to humans and could lead to severe gastro-intestinal infections.

Consuming foods that have been contaminated with pathogens such as E.coli, Salmonella or Campylobacter, can cause food poisoning.
Advertisement

C. jejuni is the leading cause of more than 371,000 estimated cases of food borne illness in the UK alone in 2009, resulting in more than 17,500 hospitalisations and 88 deaths.


It is present in the gut of many animals, including chickens. Scientists at Washington State University are studying the maternal antibodies that are passed from hens to their chicks.

A groundbreaking venture has been initiated by a group of researchers, whereby therapeutic proteins, essential in cancer-treatment, are mass-produced in the egg white of a certain breed of hen.
Advertisement
"These antibodies protect chicks from becoming colonized by Campylobacter in the first week of life," explained Michael Konkel, professor, who is leading the research, according to a Washington statement.

"Our group has now identified the bacterial molecules that these antibodies attack, which has given us a starting point for a vaccine against Campylobacter," he said.

"We have already found that chickens injected with these specific molecules--found on the surface of Campylobacter jejuni - produce antibodies against the bacterium. This response partially protects them from colonization," added Konkel.

These findings were presented at Society for General Microbiology's Spring Conference in Dublin.

A fast, reliable new test that could help people avoid a terrible type of food poisoning has been developed by scientists.
Advertisement
Advertisement