Battle to #endTB by 2030: A Multi-sector Venture To Fight TB Globally 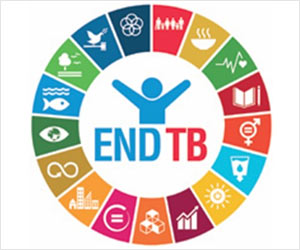 Bringing tuberculosis (TB) to an end by 2030 is welcoming as political parties have joined hands to reach the target. But governments need to walk the talk too to #endTB and deliver on promises of integrated sustainable development by 2030.

Reality check on any specific indicator to show progress made towards ending TB will raise serious concerns regarding meeting these commitments in a timely manner.

Tuberculosis, caused by Mycobacterium tuberculosis, primarily affects the lung. It may spread to other organs.
Advertisement
‘TB decline rate is not that encouraging as TB needs to decline annually at least ten times more than the current rate of TB decline.’

The latest WHO Global TB Report shows that


*Undoubtedly to #endTB by 2030 globally, business as usual is not an option* The WHO and partners are hosting a Global Ministerial Meeting on inter-sectoral response in SDGs era in Moscow, Russia in November 2017. A high-level meeting on TB around UN General Assembly in 2018 is also on the cards.

Patients with tuberculosis should eat a healthy diet so that they build up their immunity to fight against tuberculosis.
Advertisement
Indian government recently committed to end TB by 2025. Even with this high magnitude of political commitment stemming the TB tide is still challenging though seems more doable than ever before.

Cricket with a difference: Every team unites to #endTB

An innovative way to engage different ministers of health and non-health ministries and other sectors such as film stars is the friendly cricket match between Members of Parliament (MPs) team and film stars' team.

MPs team is led by MP Anurag Thakur and film stars team is led by Bobby Deol. This friendly match will be held in Dharamshala, Himachal Pradesh, India, a day after World Health Day 2017 and TB Free India Summit.

Coordinating between public and private health sectors a challenge

Since Government of India made TB a notifiable disease mandating private health sector to notify every TB case in May 2012, there is some progress but certainly not an optimal one.

The issue of coordinating and linking up the private and public sectors efficiently so as to progress faster towards ending TB in India will also be on the agenda of forthcoming TB Free India Summit in Dharamshala on World Health Day 2017.

The intent to notify TB is to ensure that every person who has TB gets diagnosed accurately, receives effective standard anti-TB therapy without delay and gets cured.

Coming together of health and non-health ministries and other sectors is certainly a big step forward. We do hope this translates into public health gains and helps in catalyzing the efforts to eliminate TB at the earliest.

Extra pulmonary tuberculosis is infection of tissues and organs other than the lungs by mycobacterium tuberculosis and related organisms.
Advertisement
<< Do You Have A Sitting Job? Watch Your Weight
Promoting Intake of Nutrient-rich Pulses for Better Health >>