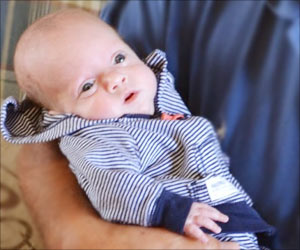 It has turned out to be a precious gift for Erica and Jared Pruett. The North Carolina couple was presented with a time-lapse video, which depicts the 80 day-long-battle of their preemie baby in the neonatal intensive care unit at Forsyth Medical Center in Winston Salem.

The couple's little boy, Walker, weighed in at just over one pound when he was born around three months ago.

A professional photographer, Deneen Bryan, photographed Walker and his family each day they were in the NICU and used the pictures to create the time-lapse video, finishing with a 'graduation' photo when he was healthy enough to be released.


Erica writes on her blog, "Walker was just so, so tiny. You couldn't touch him. You couldn't rub him. You just had to pat his skin, because his skin was so fragile. ... It was five days before we could hold him."
Advertisement
After the long battle with life, the little baby is now at home with his family, happy and thriving. Erica says, "He got weighed, he is up to 6lbs. 1.4ozs, which means he is over 5 times his birth weight a truly amazing gain!"

Erica adds, "Bryan's beautiful photos show Walker from the moment he was born and put on a ventilator, to day 80 when he was healthy enough to be discharged from hospital."

"(Bryan) was excellent to us ... She came every single day that he was in the NICU and clicked a picture of him. After we left the NICU, she did a photoshoot with us. She gave us the complete rights to all those pictures," Erica said.

The little boy was one of a number of premature babies at the hospital whose first fragile weeks of life were documented by Bryan.

Bryan says, "These images are a way to bring out the humanity of the NICU, looking beyond the tubes, cords, and machines to highlight the beauty of the miracles that occur there on a daily basis."

Bryan's own daughter died at just six months, which prompted her to set up the charity. The mother-of-six said often these families are too distressed or not able to take photos of their own.
Walker's time-lapse video is part of a series called 'Project 100 Days'. The project aims to show a preemie's growth in the first 100 days of its life at the hospital.

Baby Food - Basics
The healthiest baby foods can be made at home. Products from big brands that claim to develop ......

Paternity Testing - Whose Baby Is It Anyway?
Paternity testing involves DNA studies that are carried out under certain circumstances to ......

Top Tips to Lose Weight Fast After Pregnancy
Losing baby weight is as important as any weight loss program and the best way to lose baby weight ....