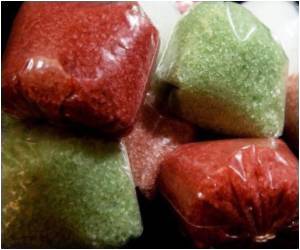 Scientists have discovered the shocking strength of a key ingredient in bath salts that leaves users struggling with the after effects for days together.

MDPV, commonly found in the street drug is ten times stronger than cocaine, according to the National Science Foundation.

It causes users to become paranoid, violent and agitated, at times leading to hallucinations.

Smokers are More Likely to Quit If They Value Their Future

Smokers are less likely than non-smokers to look to the future in planning their lives. This is fact known by addiction researchers for many years.
Advertisement
"They have extreme paranoia. They're having hallucinations. They see things, they hear things, monsters, demons, aliens.'

"In some cases, they were under heavy sedation. As you try to taper off the sedation, the paranoia came back and the delusions."

"I don't know of any other drug that has that same feature of not allowing you to escape from it."

Scientists ran tests to try to determine the drug's chemistry, finding it to be laced with MDPV, ten times the potency of cocaine.

The dangerous combination of the drug's ingredients 'flood the brain,' they said, leading to repeated episodes of psychotic behaviour.

It has emerged that troubled Kerry Katona had yet another brush with the law when office staff called up the cops after she hurled a cup of tea over her accountant.
Advertisement
<< US Drought may Cause World Food Prices Hike 'Within A Year'
Hookah as Harmful as Cigarettes, Say Researchers >>

Sinopril (2mg) (Lacidipine) Loram (2 mg) (Lorazepam) Accident and Trauma Care Blood Donation - Recipients Pregnancy Confirmation Calculator How to Reduce School Bag Weight - Simple Tips The Essence of Yoga Diaphragmatic Hernia Indian Medical Journals Drug Side Effects Calculator
This site uses cookies to deliver our services. By using our site, you acknowledge that you have read and understand our Cookie Policy, Privacy Policy, and our Terms of Use