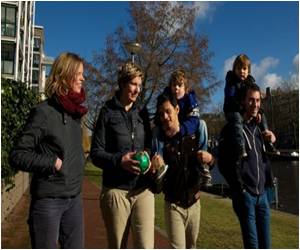 An expert has said that babies born to Indian surrogate mothers for gay and single Australians may be left stateless and unable to leave the country after New Delhi changed the rules on surrogacy.

The new rules state those opting for surrogacy need medical visas to enter India to collect their children, but the government says they will only be issued to heterosexual couples married for a minimum two years.


Surrogacy law expert Jenni Millbank said the sudden change of guidelines could leave parents currently waiting for their babies to be born in breach of Indian law and may cause problems for Australian immigration officials.
Advertisement
"If they (Australian officials) refused to grant citizenship by descent then we would be facing the prospect of children born in India to Australian parents being stateless... with no Indian citizenship, with no Australian citizenship and without the ability to travel across any international border," she told ABC television late Monday.

With commercial surrogacy illegal in Australia, as it is in some European countries, India has become a popular market for those wanting children.

Expectant father Paul Taylor-Burn travelled to India in July with his male partner to organise a surrogate and said that at that time there was no restrictions on doing so.

Changes to the law have left him uncertain of the future ahead of the birth of his twins.

"We know that we don't meet the new criteria. We know our contracts have been signed after the cut-off date. But we don't really know what's going to happen," he told the broadcaster.

"I think the biggest worry is really what's going to happen when we get there."

"Are the babies going to actually get their visas to exit the country? Is there any possibility of the babies not being able to leave? Are we potentially going to be prosecuted?"

The new rules stipulate that would-be parents must provide proof that their home country will grant citizenship to any baby born to a surrogate mother.

The move follows several publicised cases in recent years of babies born through cross-border surrogacy who have been trapped in citizenship limbo because their parents' countries refused them passports.

Australia's Immigration Department said Tuesday it was aware of the new Indian rules and was advising those affected to familiarise themselves with the legal issues affecting overseas surrogacy.

"On request, the Australian government is providing clients with a standard letter outlining Australia's surrogacy laws and citizenship and passport requirements," a departmental spokesman said.

Source: AFP
Advertisement
<< Study: Medicare Patients Who Use Hospice Receive Better Car...
More Than Million People in Britain Do Not Speak English We... >>