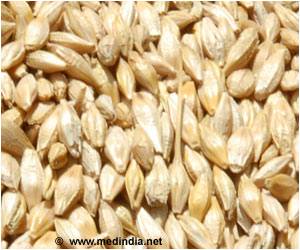 Dietary fibers in barley can contribute to reducing appetite and blood sugar levels, says a new study. The researchers also noted that barley can also rapidly improve people's health by reducing the risk of cardiovascular disease.

"It is surprising yet promising that choosing the right blend of dietary fibers can -- in a short period -- generate such remarkable health benefits," said Anne Nilsson from Lund University in Sweden.

Barley and its Benefits

Health benefits of barley far outweigh any contraindications of this wonder grain and its simplicity and availability are what we should take advantage of.
Advertisement
‘Barley helps control appetite, regulate metabolism, lower blood sugar level, and increases insulin sensitivity.’

The study was conducted with healthy middle-aged participants who were asked to eat bread largely made out of barley kernels (up to 85 percent) for three days -- at breakfast, lunch and dinner.


Approximately 11-14 hours after their final meal of the day, participants were examined for risk indicators of diabetes and cardiovascular disease.

Barley kernels taken with evening meals curb appetite and reduce the risk of diabetes and metabolic syndrome.
Advertisement
The researchers found that the participants' metabolism improved for up to 14 hours, with additional benefits such as decreases in blood sugar and insulin levels, increases in insulin sensitivity and improved appetite control.

The effects arise when the special mixture of dietary fibers in barley kernel reaches the gut, stimulating the increase of good bacteria and the release of important hormones, the researchers said.

"After eating the bread made out of barley kernel, we saw an increase in gut hormones that regulate metabolism and appetite, and an increase in a hormone that helps reduce chronic low-grade inflammation, among the participants. In time this could help prevent the occurrence of both cardiovascular disease and diabetes," said Anne Nilsson.

The ambition is also to get more people to use barley in meals, for example in salads, soups, stews, or as an alternative to rice or potatoes.

The Beta-glucan-enriched pasta was made from a mixture of 75% durum wheat flour and 25% whole grain barley flour.
Advertisement
<< Some People Are Single on Valentine's Day and Just Fine Wit...
Want To Shed Extra Kilos? Eat Walnuts! >>

The 'stay green' DNA in barley has been isolated to assist crops to grow that better withstand drought, heat and salinity.

The Better Flour - Refined Or Whole Wheat Flour!
News Archive
News Resource
Advertisement
News Category
Do Instant Formula Foods Cause More Harm Than Good? Is a Plant-based Meat Healthier Than Animal Products? Are You Eating Enough Fiber to Stay Healthy? Preventive Vitamin A Supplementation is Missed by 2 in 5 Indian Kids Does a Mother's Diet Affect the Quality of Breast Milk?
More News
Sign up for Wellness Consult a Doctor Sign up for Selfcare