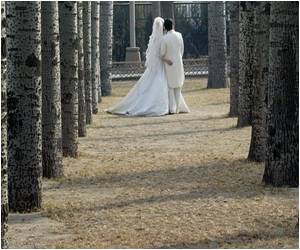 A Bangladeshi matchmaker, who quit his job as a crane operator due to stomach ulcer, revealed that there is a stigma attached to his profession even after being in the job for nearly four decades.

Nearly 40 years later, Kazi Ashraf Hossain -- known by his nickname "Pakhi Bhai" (Bird Brother) -- is celebrated as Bangladesh's national "cupid" who has put together about 10,000 couples.

"They said I had this natural ability to persuade a stubborn groom. I had to stop operating cranes after an ulcer operation, so I thought why not give matchmaking a go?" he told AFP at his smart offices in the capital Dhaka.


"With an armful of photos, I set myself up in business. My father vehemently opposed it. For him it was the worst job."

In the early years, Pakhi Bhai used to go about his trade like a street hawker, visiting families door to door with photographs of potential brides and grooms.

Divorce can be traumatic for children and create a sense of insecurity amongst them. Couples should realize that joined parenting is important even after divorce.
Advertisement
"The number of clients was negligible in the early days," said Pakhi Bhai, who started out in 1973. "The reward was meagre, not enough to feed my family properly."

"I used to travel between clients so fast that they wondered whether I flew in like a bird. Hence the name: Bird Brother."

His break came in the late 1970s, when he invested money and started to buy newspaper advertisements. "It shocked a lot of people. The hotel where I lived threatened to evict me," he said.

But now he is a well-known celebrity, a regular feature on annual Valentine Day television specials and widely admired for his wealth, influence and contacts.

The job has changed from the days of walking the streets, and Pakhi Bhai now works out of his headquarters in a swish city mall with three mobile phones on the go, a computer database and five female assistants.

He charges between $1,200 and $4,000 when a marriage takes place, and also runs a membership scheme that gives access to thousands of online resumes and photographs.

Even such resources cannot help everyone, and his latest clients -- two sets of families -- emerge disappointed from the "match-making room" in Pakhi Bhai's office.

Ahmed, who works in Portsmouth, Britain, for an aerospace subsidiary, has returned to Bangladesh on extended leave to find a wife, but his search has not yet been successful.

"The batteries didn't spark," Pakhi Bhai said. "The boy is highly qualified. It's natural the family will look for a beautiful girl. They want someone who must be beautiful, educated, slim and at least 5 foot 2 inches (157 centimetres)."

For Pakhi Bhai, all marriages should be "arranged" by family members in the traditional manner instead of being "love" marriages between two individuals.

"I have seen thousands of love marriages break up after the wedding. These divorcees then come to us for an arranged marriage," he said.

"An arranged marriage is rock solid because it is the union of two families and their extended kin. The two families own the couple and they try their best not to allow it to split," he said.

But migration to cities has dispersed communities and broken the traditional ties through which wedding were set up -- so a professional matchmaker is increasingly necessary, particularly as aspirations are rising fast.

"Girls are now very choosy. These days they would rather wait into their late 30s than marry someone not fit for them. Two decades ago if a girl was not married off before 25, she must have something terribly wrong," he said.

"Old-fashioned qualities like honesty, humility or good character are being forgotten," he said ruefully. "Every girl wants a groom who must be rich and smart. He must own a car or a flat in the city."

Pakhi Bhai is a good advertisment for his own business. He has six children with his first wife and then -- with her consent -- took a second wife as allowed under Muslim law.

"I live in the capital and my first wife lives in my village home in (southern) Barisal district. I needed someone to look after me here in Dhaka," he said.

In recent years, matchmakers have been criticised for inflating the job status and wealth estimates of their clients to tap into the sought-after market of grooms who work abroad.

"Upstart agencies have grown like mushrooms," Pakhi Bhai said. "It's hard for a matchmaker to know if a girl lied about her age or a boy about his wealth.

"For us, it's goodwill that matters most. One big mistake and people would turn against you."

Pakhi Bhai has become rich and successful but he still feels a stigma is attached to his job.

"People don't want to show that their marriage was aided by a matchmaker. They think any recognition of our role will bring shame or spoil their party.

"I've found matches for so many people including some whose parents had all but given up hope. But I almost never get asked to their weddings," he said.

Infidelity is no longer seen as a midlife crisis alone because younger people are beginning to cheat on their spouses
Advertisement
Advertisement
This site uses cookies to deliver our services.By using our site, you acknowledge that you have read and understand our Cookie Policy, Privacy Policy, and our Terms of Use  Ok, Got it. Close
×