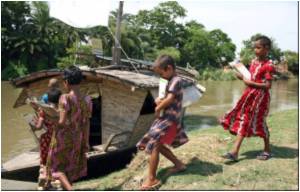 With no end in sight to politically motivated violence and other abuses in Bangladesh, state authorities need to ensure their response respects the rights of all and avoids arbitrary use of force, arrests and disappearances, said Human Rights Watch.

Over the past month, nearly 60 people have been killed, hundreds injured, and thousands arrested across the country. All political leaders should give clear statements that their supporters should not use unlawful violence.

First case of deadly MERS virus was reported in Bangladesh on Sunday, after a Bangladesh-born US resident was admitted to hospital days after returning to his homeland in via Abu Dhabi.
Advertisement

"All parties should cooperate to stop the cycle of violent crimes and ensure those responsible for all crimes are arrested and prosecuted," said Brad Adams, Asia director at Human Rights Watch. "The violent crimes being committed by some members of the opposition cannot justify killings, injuries, and wrongful arrests by the government."


The violence and clampdown by government security forces began in early January 2015, with protests to mark one year since the controversial 2014 elections which saw the ruling Awami League party win a landslide victory after an opposition boycott of the polls. The government's tactics to contain the violence echo previous violations including arbitrary arrests and killings, and enforced disappearances.

'Made in NYC' Campaign Boosted by Bangladesh Factory Tragedy

May focused on the task at hand as she carefully stitched the outline for a buttonhole.
Advertisement
The current cycle of opposition violence, including deadly arson attacks, follows the same pattern as documented by Human Rights Watch a year ago, when more than 500 people were killed in the 2014 election-related violence.

Human Rights Watch noted that one of the most horrific aspects of the violence in Bangladesh are petrol bomb attacks, often hurled indiscriminately at private vehicles attempting to pass through strikes and transport blockades called by the opposition. Since most Bangladeshis rely on daily wages, they end up at risk of attack while travelling for work.

On February 3, 2015, seven people died when a petrol bomb was thrown at a night bus carrying about 60 people from Cox's Bazaar to Dhaka. Sixteen others were injured in the attack, and the bus was completely charred. On February 5, the driver and passenger of a truck in Bogra died when their vehicle was petrol bombed.

A police officer injured in a separate petrol bomb attack on January 17 died on February 5 as a result of his injuries.

Since early January, human rights activists put the estimate of dead at the hands of opposition members at 41, many due to such arson attacks. In addition to the dead, several hundreds have been injured over the course of the last month.

Some countries, including the United States and United Kingdom, have called for an end to the violence, Human Rights Watch said. India, whose opinion would count with Bangladeshi political parties, should also renew their call for an end to the abuses.

"The abuses in Bangladesh can no longer be ignored by the world," Adams said. "The political leadership needs to hear strongly that unless this bloodletting stops, it will impact their standing with other countries."