Band Aid-sized Wearable Sensors may Now Watch All Your Moves 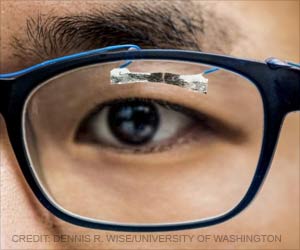 A novel disposable band aid-sized wearable sensor has now been developed to monitor your minute-by-minute activity such as your pulse, eye blinks and even walking pace all using a cheap toilet tissue. The findings of this study are published in the journal of Advanced Materials Technologies.

The sensor is light, flexible and inexpensive, with potential applications in healthcare and robotics.

Advertisement
‘The band aid-sized sensor can detect heartbeats, finger force, finger movements, eyeball movements and so much more. It has a variety of applications such as that of monitoring a person's gait and to inspect brain functions.’

Researchers, in the journal Advanced Materials Technologies, showed that by tearing a tissue paper that is loaded with nanocomposites and breaking its fibres, the paper acts as a sensor.


It can detect a heartbeat, finger force, finger movement, eyeball movement and more, said Jae-Hyun Chung, Associate Professor at the University of Washington.
Advertisement
"The major innovation is a disposable wearable sensor made with cheap tissue paper. When we break the specimen, it will work as a sensor," Chung said.

These small, band aid-sized sensors could have a variety of applications such as monitoring a person's gait, the movement of their eyes, and to inspect brain function or a game player's actions.

The sensor could also track how a special-needs child walks in a home test, as well as in occupational therapy for seniors.

"They can use these sensors and after one-time use, they can be thrown away," Chung noted.

For the research, the team used conventional paper towels, then doused them with carbon nanotube-laced water.

Carbon nanotubes are tiny materials that create electrical conductivity. Each piece of tissue paper has both horizontal and vertical fibres, so when the paper is torn, the direction of the tear informs the sensor of what has happened.

To trace eye movement, they are attached to a person's reading glasses.

For now, the work has been contained to a laboratory, and researchers are hoping to find a suitable commercial use.

Source: IANS
Advertisement
<< Can Rapid Increase in Pollution be Harmful to Heart?
Alzheimer's Disease Can Now Be Reversed >>

Wearable Sensor Patches can Detect Deadly Gases and High Levels of UV Radiation
The wearable sensor which can be worn as patches on the skin or incorporated into a person's ......

Smartphone Apps and Wearable Sensors May Help People Make Better Health Choices
Self-monitoring with new mobile health technologies has become one of the core strategies for ......

Sensor Worn on the Ear Monitors Body Temperature in Real Time
Current wearable sensors can detect skin temperature, but a 3-D printed sensor worn on the ear can ....