Ban on 'Running of the Bulls' by Top Indian Court 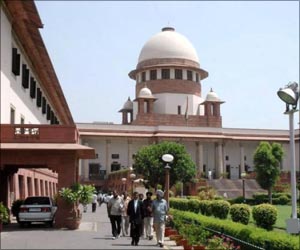 Ancient tradition of young men running with bulls has been banned by India's top court on Wednesday, saying in inflicted "extreme cruelty" on animals, in a ruling hailed by animal rights activists.

The bull run, known as "Jallikattu", is a central part of the rice harvest festival of Pongal in villages in southern India in January. Some foreign tourists travel to the country to watch and take part in the spectacle.

An Indian court has turned down a plea for abortion from a woman who is 25-week pregnant. The court held there was no abnormality in the foetus as claimed by her.
Advertisement

In the Jallikattu, young men struggle to grab the bulls by their sharpened horns or jump on their backs as the muscular animals, festooned with marigolds, charge down the road.


Unlike the famous running of bulls in Pamplona in Spain, the Indian participants have to hang on to the bulls rather than leap out of their path as the animals thunder by.

A banned bullfight involving a 10-year-old child matador will go ahead Thursday in the southern French town of Arles despite protests from anti-corrida campaigners, organisers said.
Advertisement
Many men have lost their lives over the years, gored by the bulls as the animals seek to shake them off their backs.

"All living creatures have inherent dignity and a right to live peacefully," declared Supreme Court Justice K.S. Radhakrishnan in the ruling.

"The right to dignity and fair treatment is, therefore, not confined to human beings alone, but to animals," the judge said.

Organisers of the Indian bull run say it is a way for young men to show their bravery and participants say the aim is to tame the animals. Prizes can be won if a man stays on the bull for a certain distance.

The judge added that investigations showed that bulls used in the events were subject to "extreme cruelty and unmitigated" suffering.

The ruling followed a long campaign by animal rights activists, who say organisers throw chilli powder in the bulls' eyes and pinch their testicles to enrage them before the run.

The People for the Ethical Treatment of Animals (PETA) group called the ruling a "landmark victory for animals in India".

"The Supreme Court has made it clear senseless cruelty to bulls will no longer be tolerated and that animals deserve our protection and respect," said PETA India's veterinary affairs director Manilal Valliyate.

In the wide-ranging judgement, the judge also banned bullock cart-racing and said people have a duty to protect animals from "beating, kicking, over-driving, (and) overloading".

An Indian court has held that live-in spouses too are liable for conviction for dowry-related crimes. That they are not legally wedded would not in anyway mitigate the gravity of the charges.
Advertisement
<< Saudi Hospital Head Sacked With Rise of MERS Death Toll to ...
Parasite Levels in Blood is Not the Sole Factor of Severity... >>

Indian Dentist Fails to Get Bail in Twin Murder Case

Indian Medical Journals Diaphragmatic Hernia Noscaphene (Noscapine) Turmeric Powder - Health Benefits, Uses & Side Effects Pregnancy Confirmation Calculator Find a Hospital Find a Doctor Vent Forte (Theophylline) Drug Side Effects Calculator Daily Calorie Requirements
This site uses cookies to deliver our services. By using our site, you acknowledge that you have read and understand our Cookie Policy, Privacy Policy, and our Terms of Use