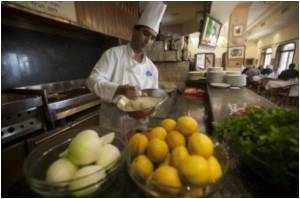 UK government announces ban on migrants coming to UK from outside from working as chefs in fast food outlets and takeaways.

The clampdown on the number of immigrants working in the UK will also see hairdressers, beauty salon managers and estate agents all left out from April.

While dishing out delicious food, chefs can do their bit to reduce obesity rates by making low calorie meals.
Advertisement

Further cuts could follow as the government has asked the Migration Advisory Committee (Mac) to "review shortages across the entire labour market with a view to amending the shortage occupation list", which details the posts for which employers can hire from outside the EU.


The moves are part of efforts by the government to meet its pledge to bring net migration down from around 200,000 to the tens of thousands by 2015.

A day after firing a 10-tonne hummus broadside in a food fight with Israel, chefs in Lebanon weighed in with another first for a Guinness record on Sunday -- five tonnes of falafel.
Advertisement
"These changes to the shortage occupation list will ensure that only skilled workers are coming to the UK through tier two of the points-based system," Green said.

"It will allow firms to bring in people with necessary skills without migrants becoming the first resort to fill a wide range of available jobs.

"This Government is also determined to get people back to work and provide business with the skills they need from the British workforce - reducing the need for migrants at the same time as we reduce their number."

The number of skilled jobs open to immigrants from outside the EU will be halved under the Government's plans.

Eight occupations will be removed from the government's list, effectively reducing the number of posts available from about 500,000 to about 230,000 - less than 1 percent of the UK labour market. Only some of these jobs will be taken by immigrants.

Non-EU migrants wanting to work as chefs will need to have graduate-level qualifications, with a minimum of five years' previous experience in a role of at least equivalent status to the one they are entering.

They will also need to be paid a minimum of 28,260 pounds a year after deductions for accommodation and meals, the Home Office said.

The posts of senior care workers, sheep shearers and meat trimmers are also among those to be taken off a list of occupations where there is a UK skills shortage. The changes implement recommendations from previous Mac reports.