Ballet is the Latest Craze Among Singapore Grannies 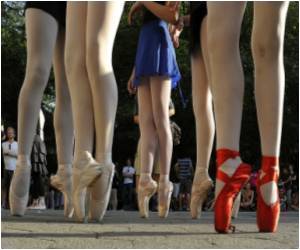 Grandmothers in Singapore do not wish to be left behind as far as fitness goes, and many of them have taken to ballet to stay healthy.

Lee is a 62-year-old grandmother with her hair bundled up in a hairnet, one of a growing number of older people in Singapore trying to stay fit and active in a fast-greying society with an average life expectancy of 81.4 years.

In a study it was found that physical activity improves Irritable bowel syndrome (IBS) symptoms and also protects against deterioration of the condition.
Advertisement

Ballet was Lee's childhood dream, but it took her decades before she finally had the time and freedom to pursue it.


"My mother did not allow me to learn ballet, saying I should focus on my studies, and that dance was not a well-paying job," she said.

"I could only admire the girls in my school dance, and then secretly try the moves in my room."

Age-Related Differences Observed in Hormonal and Molecular Responses to Exercise

A new study has revealed that differences in muscle responses to exercise in older versus younger men also reflect differences on the hormonal, molecular, and gene-expression level.
Advertisement
Now the former supervisor at an electronics factory, who retired in 2002, dances with other adult students every Sunday morning at a community centre near her suburban apartment.

"I like ballet a lot. It makes me very happy. I will continue dancing until I cannot dance," she told AFP.

Singapore, like other affluent Asian societies such as Japan, South Korea and Hong Kong, is grappling with an ageing population because of falling birth rates and longer lifespans.

By 2030, 20 percent of Singaporeans are forecast to be 65 years or older, according to official statistics.

The government has been encouraging senior citizens to lead healthy lifestyles, and elderly Singaporeans are taking it upon themselves to explore various forms of exercise including dance.

"Physical activities for elderly women require their mind and body to participate together, which is wonderful for their mental and physical wellness," said Tan.

However, learning ballet is not easy for mature women, some of whom have to struggle with medical conditions, injuries -- and fear of failure.

Jacqueline Chow, 53, who has studied ballet at a community centre since 2008, finds it hard to execute some ballet steps because of her spinal, knee and foot problems.

To help her out, her ballet teacher alters the exercises.

"As I have stiff joints in my leg, I cannot do a grand plie, which is the bending movement of both knees," she said. "So I only do a plie within my own limits."

She once swung too hard and fell down while doing a pirouette, the classic ballet move of turning on one foot.

"It was very painful, but I learned from it. Now I know that I cannot shift my body too hard when I do a pirouette," said the university employee.

After three years of ballet, Chow says her back is stronger and her body more flexible.

Yu Shuhuai, 55, a China-born dance instructor who has been teaching ballet at several government-funded community centres in Singapore for eight years, enjoys working with mature women because of their attitude.

"Once when I came to class early, I saw the dancers reading their notes and revising the dance steps," Yu said. "I was so touched."

Their age does show occasionally, and not only in their restricted movements.

In 2003, a group of elderly women approached him and asked if he could help them fulfill their dream of learning ballet. He agreed and started classes with six students.

To cater to this group, Yu did some research on their body structure and physical condition before devising dance moves that allow them to understand the characteristics of ballet, yet do not harm them.

"Ballet, unlike other dances, exudes grace. It helps their bodies become more youthful," he said.

"Other than giving them an opportunity to make friends, it prevents and postpones their illnesses, and helps them stay happy and confident too."

People who exercise regularly for at least 20 minutes, 5 days a week were 40% less likely to fall sick than those who exercised for one day or less.
Advertisement
<< Protein Biomarkers to Detect Lung Cancer
Toddler Learns to Walk Following Surgery That Removed Half ... >>