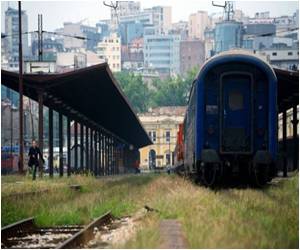 Boban Petrovic has taken a train from Belgrade every three months to visit his family in Montenegro for years and each trip makes him shudder with fear for his life.

"I usually lull myself to sleep with a glass or two of wine to survive the trip," Petrovic, a 37-year old hairdresser, told AFP.

The 475 kilometre (285 mile) ride between the Serbian capital and Montenegro's southern port of Bar sometimes takes up to 16 hours.


Riding through idyllic countryside, both passenger and freight trains pass through dozens of tunnels piercing steep limestone mountains and cross long bridges over the deep gorges of Serbia and Montenegro.
Advertisement
The journey was once seen as a pride of communist Yugoslavia, the Belgrade-Bar railroad was designed for speeds of up to 120 kilometres (70 miles) per hour when it was finished in 1976.

Nowadays, trains can travel over some sections at only a tenth of that speed.

The ailing infrastructure and decades-old trains do not inspire confidence among passengers.

In 2006, a passenger train derailed and plunged into a canyon outside the Montenegrin capital Podgorica as it emerged from a tunnel, killing 47 people and injuring nearly 200.

Since the bloody break up of Yugoslavia in the 1990s, most railroads have been poorly maintained by the countries that emerged from the communist federation.

"Except Croatia, where it is slightly better, railway networks are neglected and in a bad shape," said Dejan Lasica, Serbia's deputy transportation minister.

In Serbia, at most 30 kilometres of track have been overhauled annually in the past two decades, instead of the 190 deemed necessary.

The average speed is now 42 kilometres per hour.

But along some 400 kilometres of track, or almost 10 percent of the total network in Serbia, the maximum allowed speed is only 10 kilometres per hour.

The slow speed on top of delays that can last hours has led to a sharp fall in goods traffic by rail in the region to just 8 percent.

In Bosnia, 13 million passengers travelled by train per year before the war, while nowadays only 800,000 people take such a journey.

Beside the poor state of tracks, trains throughout the region are on average older than 30 years.

During the 1980s, it was a five-hour ride in a comfortable train with a stewardess, popular among skiers and youngsters seeking fun in the vibrant Bosnian capital.

After being shut for 19 years, it finally reopened in 2009, but the now dilapidated trains that used to make the run before the war needed almost ten hours to reach their destination, crossing three international borders.

It shut three years later as few people were willing to pay to the slow service at the price of 31 euros ($41) while they could take a bus for only 10 more euros and have a much more comfortable and almost a half shorter trip.

Two World Bank studies conducted in the past decade have urged the Balkan states to liberalise and privatise railway transport, step up invest into infrastructure and ease border crossing procedures.

And the impact is wider than inconveniencing travellers.

"The poor quality of rail infrastructure impacts negatively on the global competitive position of economies" in the region, a 2011 World Bank's study said.

Serbia has taken 1.5 billion euros ($2 billion) in loans, mostly from the European Investment Bank, European Bank for Reconstruction and Development and Russia, to invest into track reconstruction and buy desperately needed new trains.

"It will take some time, but we expect a significant improvement in speed and confort within five years," Lasica said.

The main goal is to renovate the so-called Corridor 10, linking western Europe with Greece and Turkey, the longest part of which passes through Serbia, he added.

The railroad that once linked Paris with Istanbul by the famous Orient Express, is considered a key trade route, so Serbia, Croatia and Slovenia have agreed to form a joint company that would offer a unique service along the route, so far only for freight trains.

Petrovic hopes the promises of investment are kept.

"It is always a lottery with the Serbian train carriages: some have no heating, others are without electricity or you can not close or open the windows," Petrovic said.

"Even worse, it is a death trap, but we, who decide to take this train, have already come to terms with it," he said.

But at least there is a tiny improvement, he said: "no drunken conductors on trains anymore."

Railways Asked to Provide Medical Facilities to Accident Victims
Railways have been asked by the Mumbai High Court to provide medical facilities to commuters who ......