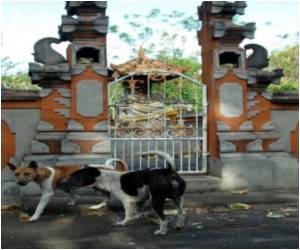 The Indonesian government is to vaccinate all dogs on the holiday island of Bali to combat a raging rabies epidemic that has left 76 people dead over two years, an official said Friday.

Around 34,000 people have been bitten by dogs on the island, which is popular with western tourists, in the first seven months of this year alone, authorities said.

"We aim to vaccinate all dogs in Bali by the end of this year to curb the spread of rabies. We'll start to mass vaccinate the dogs in late September," Bali animal husbandry agency chief Putu Sumantra said.


"There are still hundreds of thousand of dogs that have not been vaccinated. About 200 teams will be deployed to work in 700 villages," he said.

Chinese authorities have fined two drug companies, including one authorised to make swine flu vaccines, for producing substandard rabies shots, state media said Monday.
Advertisement
Unlike the rest of mainly Muslim Indonesia, where people do not generally keep dogs, Bali is a predominantly Hindu island and dogs are common either as pets or strays.

Sumantra said that since 2008, about 300,000 dogs had been vaccinated. Tens of thousands of stray dogs had also been culled.

Bali health agency head Nyoman Sutedja said there were 34,000 cases of people being bitten by dogs in Bali this year compared to 28,000 dog bites in the whole of 2009.

"The rising cases of bites have made us worry. We need more anti-rabies vaccines for people here," Sutedja said.

The latest victim of rabies, a 43-year old Balinese woman, died on Tuesday.

Australia and the US have issued travel warnings to tourists about the prevalance of the disease.

Moves by the European Commission to loosen controls on pet passports could spark the return of rabies to the UK, warn specialists.
Advertisement

A nationwide move to destroy, vaccinate, and neuter stray dogs has been planned in Bangladesh after alarming figures showed rabies to be a major killer.
Advertisement

Animal bites are common in humans. Bites caused by domestic pets are not fatal unless they become ...