Baghdad's Popular Pet Shop Drawing Crowds With Wolves, Bears and Even a Lion 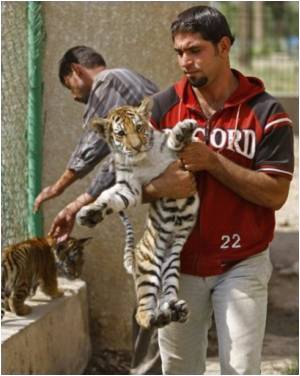 Sabah Alazawi is no ordinary pet shop owner. He's doing a roaring trade these days at his Baghdad pet shop, and some of that success could be attributed to the lion he's put up for sale. Along with bears, wolves, monkeys and vultures that is.

While hundreds of people visit his menagerie daily, most are there because it offers a free alternative to an outing to the zoo, rather than to buy.

More than 100 abandoned dogs bark and jump as if competing for the attention of their potential adopters inside the Hong Kong Dog Rescue centre.
Advertisement 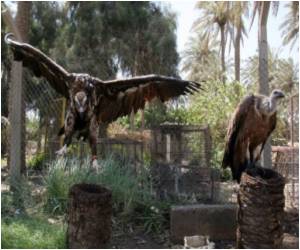 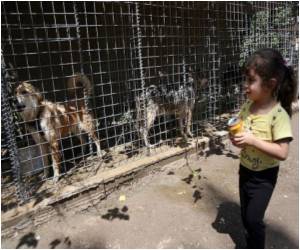 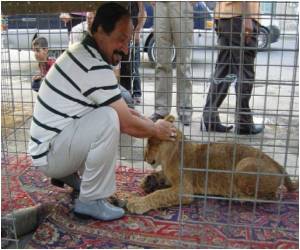 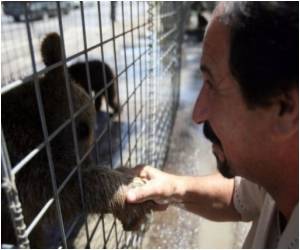 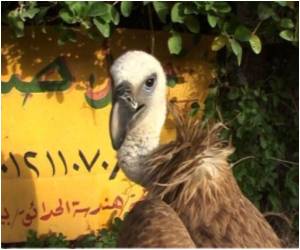 But Alazawi, an ex-soldier who has long harboured a passion for wild animals, doesn't mind in the least.


"Children and families are depressed in Iraq. I am proud to give some happiness to these people," he says, as crowds mill around his pet shop in Mashatel street, a leafy thoroughfare in northern Baghdad's Adhamiyah district.

Travelling With Pets on Planes

The preferences of pet owners should not replace the well-being of their fellow passengers, states an editorial in CMAJ (Canadian Medical Association Journal) (pre-embargo
Advertisement
Jutting out on to the pavement are three cages that serve as the homes respectively of two young bears, a lion cub and a pair of baboons.

Another monkey, chained at the leg, hops from one cage to another while two vultures are tied to their perch nearby, completing the strange scene that meets the bemused gaze of passersby and motorists queuing at a security checkpoint on the other side of the road.

More curiosities can be found inside the shop, which gets around 400 visitors a day.

According to Alazawi, the numbers increased dramatically once the sectarian violence which ravaged the Iraqi capital from 2006 to 2008 began to decline.

Wolves, peacocks, two young alligators, an ostrich, a badger and a porcupine are also in residence, and the next arrivals -- a pair of hyenas and two more baby lions -- are expected soon.

"Animals are my passion," the 59-year-old Alazawi says with a smile.

An array of faded press articles and old photos cover the walls of his office, depicting him alongside exotic animals, including lions or with an uromastyx -- a giant spiny-tailed lizard that lives in the Iraqi desert.

Alazawi's obsession runs in the family. In one of the photos, his son Ammar is shown sitting on a doberman at the age of two. In another, taken 20 years later, a live snake wraps itself around Ammar's neck.

Alazawi opened his exotic animal shop two decades ago, but he traded in smaller creatures until he splashed out on his first lion in 2000.

Since then he says he has sold around 10 kings of the jungle -- mainly to Iraq's zoos and at a price of around 6,000 dollars each.

He declines to discuss details about where the animals come from but says nobody has ever bothered him about the legality of his business.

He has also raised three bears, one of which was confiscated by the US military who took it to the Baghdad zoo and another which he sold to the zoo in the southern province of Diwaniya for 1,500 dollars.

The third was found dead in its cage one morning in 2006, at the height of the sectarian violence in the traditionally Sunni district, with a bullet in the stomach.

Today Alazawi has a monthly budget of around 2,500 dollars, which covers the food for his animals and the salaries of his six employees, one of whom is a veterinarian.

Procuring meat for the animals is not a problem in Baghdad these days, unlike at the beginning of the US invasion in 2003 when they had to kill two donkeys every day to feed the lions in Baghdad zoo.

His core business comes from the dozens of mastiffs, dobermans, rottweilers and German shepherds barking behind the wire mesh of their cramped cages. Alazawi offers 20 different breeds for prices that can reach as much as 800 dollars.

"The dogs sell well in winter when people stay at home, because they can keep them outside and use them as guard dogs," he said as he played with the long beak of one of his three pelicans.

To the delight of his onlookers, Alazawi happily enters the cage of the lion cub which he strokes and teases as he would any other pet.

"Every day I bring him home with me, to get him used to being with humans, and in the evening he watches television with me on the sofa," the pet shop owner says

He also takes the bears home with him at night, and raised the alligators at home. But they now live in a small cage with a pool of dirty water that they share with two turtles.

Falah Hassan, 31, said he often visits the menagerie because unlike the Al-Zawra zoo in central Baghdad it is free.

"The growing crowd shows that things are getting better in Baghdad. People are going out more than before," he said.

Cats More Likely to be the Pets of Clever People

A University of Bristol study has found that owners of cats are generally the ones who have a degree compared to owners of dogs.
Advertisement
<< Japan's Urban Jungle Filling Up With Real Busy Bees
Argentina's First Wedded Gay Couple Receive a Honeymoon Gif... >>

Pet Politics: Will Pets In Switzerland Win Their Rights to Legal Representation?

In a country that already outlaws flushing goldfish down the toilet and protects social pets' need for company, Switzerland will vote Sunday on whether abused animals deserve lawyers.