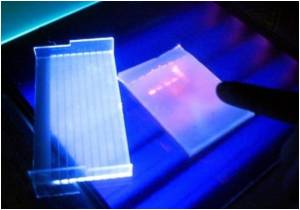 A new study presented at the annual meeting of the American Society for Microbiology has found the presence of bacteria responsible for respiratory illness, including the deadly pneumonia known as Legionnaire's disease, in the windshield washer fluid of nearly three quarters of school buses tested in one district in Arizona.

"Washer fluid spray can release potentially dangerous numbers of these bacteria into the air. These results suggest that automobiles may serve as a source of transmission for Legionella infections," says Otto Schwake, a doctoral student at Arizona State University, who presented the research.

Legionella are bacteria that are found naturally in the environment, usually in water. They are commonly associated with the cooling towers found in large-scale air conditioners and hot tubs. They are not spread from person to person but instead are transmitted via mist or vapor containing the bacteria. Most people exposed to the bacteria do not become ill, but in some people it can cause Legionnaires' disease, a severe form of pneumonia. The bacteria can also cause Pontiac fever, a milder illness resembling the flu.


The results presented come from a series of experiments conducted in the summer of 2012. Schwake and his colleagues attempted to grow Legionella bacteria in a variety of different washer fluid preparations. They found that the bacterial concentrations increased over time and they were able to maintain stable populations for up to 14 months. In the second study, they tested the washer fluid from school buses in central Arizona and found culturable Legionella in approximately 75% of the samples.
Advertisement
Although windshield washer fluid is not normally associated with spreading disease, Schwake says this project was begun after a series of epidemiological studies found motor vehicle use to be associated with increased risk for Legionnaires' disease. One such study attributed nearly 20 percent of Legionnaires' disease cases in the United Kingdom not associated with hospitals or outbreaks to automobile windshield washer fluid.

"This study is the first to detect high levels of Legionella in automobiles or aerosolized by washer fluid spray," says Schwake. "While potential transmission of a deadly respiratory disease from a source as common as automobile windshield washing systems is significant, the study also points to the fact people can be exposed to pathogens - particularly those occurring naturally in the environment - in previously unknown and unusual ways."

Legionnaires disease
Legionnaires' disease is a severe form of pneumonia caused by a type of bacteria. The infection is ....

Legionnaires Bacterial Proteins Work Together To Survive
Proteins within the bacteria that cause Legionnaire's disease can kidnap their own molecular ......

Legionnaire Microbe's Tricks Uncovered
Researchers at Yale University have offered new insights into how bacteria like the ones that cause ...