Bacteria on the Beaches of Northeast Ohio 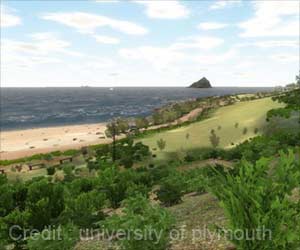 While beachgoers are aware of the looming risk of disease associated with beach visits, a recent study by a Kent State University shows they may not be aware of all the dangers the beach poses.

In November, Tara C. Smith, Ph.D., a professor of epidemiology in Kent State's College of Public Health, published the findings of a study her lab conducted in 2015 that shows a higher-than-expected prevalence of Staphylococcus aureus and methicillin-resistant Staphylococcus aureus (MRSA) at beaches around Lake Erie.

"When we think about beach contamination, we usually think about things like E. coli," Dr. Smith said. "The Ohio Department of Natural Resources tests for that and other bacteria, but not usually for MRSA or other staph variations."


Dr. Smith's article, "Prevalence and characterization of Staphylococcus aureus and methicillin-resistant Staphylococcus aureus (MRSA) on public recreational beaches in Northeast Ohio," was published in the journal GeoHealth. Students in her lab took 280 samples from 10 freshwater recreation areas beaches, finding Staph aureus in 64 samples (23 percent) and MRSA in 23 samples (8 percent).
Advertisement
Staphylococcus aureus and MRSA can cause severe and even life-threatening illnesses, including sepsis and endocarditis. Staph is also notorious for contaminating open wounds and turning a small cut into a catastrophe. Dr. Smith said roughly 11,000 people every year in the United States die of staph and MRSA-related disease, while the bacteria cause another 80,000 invasive infections and millions of skin and soft-tissue infections.

"We don't know if people are getting sick at these beaches because of it, but if they are immune-compromised or have open wounds, then they should be aware of the risks," Dr. Smith said.

Staph levels at beaches were shown to be more than 40 percent higher in the summer when beaches are most heavily used.

Besides methicillin, MRSA and other variations of Staphylococcus aureus, are often resistant to antibiotics like erythromycin, tetracycline and penicillin, making them more difficult to treat. Dr. Smith said, though, that for such dangerous microorganisms, Staphylococcus aureus and MRSA can be thwarted in many cases with careful hygiene.

"Simply using the showers that many beaches provide to rinse off after being on the beach or in the water can help you avoid carrying that bacteria home with you," she said.

Decrease in Methicillin-Resistant Staphylococcus Aureus Infections
Understanding how and why rates of MRSA have diminished in recent years is essential for the ......

Beneficial Bacteria in the Nose Suppress the Staphylococcus Aureus Bacteria
How harmless Corynebacterium species, bacterial members of the nasal and skin microbiome, hel...

Humans can Give Monkeys Staphylococcus Aureus Bacteria
While humans acquired many deadly diseases originally through contact with animals, pathogens can .....