Bacteria Could be the Culprit for Flaky Scalp 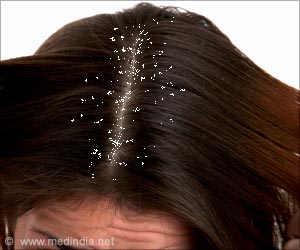 Fungus is not the reason for dandruff, an imbalance between two bacteria that colonize the human scalp and is widely believed to be the main cause of the condition.

Think of Propionibacterium and Staphylococcus as the yin and yang of healthy hair: when they hold each other in check, so too is dandruff held at bay.

Dandruff or Seborrheic dermatitis affects the skin and is a common cause of hair loss. It is a chronic inflammatory skin disease.
Advertisement
‘An imbalance of two dominant bacteria Propionibacterium and Staphylococcus in the scalp resulted in white flakes.’

But when one dominates the other, the tell-tale white flecks that settle on shoulders like snowdust begin to proliferate, a team of Chinese and Japanese researchers reported.


Dandruff is the most common scalp disorder on the planet, a tonsorial bane for about half the world's population.

But experts have differed sharply over the years on its causes and possible cures, though consensus has formed of late around one culprit in particular.

A new survey has found that men in New Zealand are very much worried about their looks with hair loss, dandruff and weight gain being their three biggest concerns.
Advertisement
"Microorganisms on the scalp -- especially fungi -- have been predominately thought to be the main cause of the development of dandruff," they noted in the study, published in the Nature Group's Scientific Reports.

Suspecting this might be wrong, a team anchored by Zhang Menghui of Shanghai Jiao Tong University isolated a large number of variables in the ecosystem of the human scalp to see how they interact.

In 59 Chinese volunteers aged from 18 to 60 years old, they measured levels of water, several dozen bacteria, sebum -- an oily secretion that proliferates in adolescence and early adulthood -- and the allegedly villanous fungus, called Malassezia.

Participants washed their hair 48 hours in advance of the tests, and dandruff samples were taken from eight different sections of the scalp.

"Overall, fungi did not exhibit an important role in the severity of dandruff," they concluded.

"The relationship between the bacteria and the dandruff was significantly stronger."

But the scientists also noticed that prevalence of the pesky white particles was higher when the ratio of two dominant bacteria -- which normally cancel each other out -- was altered.

"This study suggests that adjusting the balance of the bacteria on the scalp... might be a potential solution to lessen dandruff," they concluded.

Using curd and lemon, or getting a hot oil massage during winter months, can prevent hair fall and dandruff, says an expert.
Advertisement
<< Childhood Obesity Rates on the Rise in Australia
Childhood Obesity Starts in the Womb >>

A seemingly colossal task of hair care and dandruff prevention during the monsoon season can be made easy through simple lifestyle and diet changes.

How to Reduce School Bag Weight - Simple Tips Diaphragmatic Hernia Selfie Addiction Calculator Sinopril (2mg) (Lacidipine) Blood Donation - Recipients Find a Hospital Noscaphene (Noscapine) Loram (2 mg) (Lorazepam) Find a Doctor Blood Pressure Calculator
This site uses cookies to deliver our services. By using our site, you acknowledge that you have read and understand our Cookie Policy, Privacy Policy, and our Terms of Use