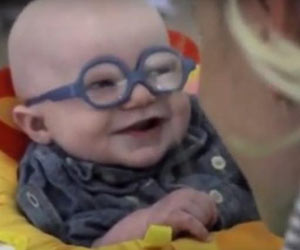 A four-month-old baby smiled after seeing his mother clearly for the first time in his life. Leopold Wilbur Reppond, known as Leo, suffers from a rare disorder called oculocutaneous albinism. The condition affects the color of a person's hair, skin and eyes.

Leo's dad, David (39), a film producer, said, "Cuteness went through the roof when my son smiled for the first time. There "wasn't a dry eye in the house."

"I had some issues holding the camera because I was crying so much. I was overwhelmed with emotion. It's just very touching. You cannot anticipate how you're going to feel when something like that happens. It was very heartwarming."

Oculocutaneous Albinism affects one in 20,000 children and affects the color of their skin, hair and eyes and leaves them with extremely bad vision.

Learn what is albinism, genetics behind it, types, causes, symptoms and treatment for albinism.
Advertisement
The family sought treatment from Los Angeles-based pediatric ophthalmologist Kenneth Wright and got special infant glasses from Miraflex, a US glasses company.

The glasses have normal lenses but are made of a rubber like material which does not have screws, hinges, and sharp edges.

When the spectacles were placed on Leo, he made eye contact with his mother and smiled.

David said that before his son used to 'see with his hands' because of impaired vision.

"He can see us now. He's starting to see objects in front of him for the first time. He's smiling a lot more, and he can see everybody in the room, he's interacting more. He loves the light, and he loves being outdoors where he can see the grass and the blue sky. He loves toys and he's starting to reach for things."

According to the NHS, a person with oculocutaneous albinism is missing the pigment from their irises, which is the colored part of the eye. This causes impaired vision and sensitivity to light.

Is Albinism Treatment On The Anvil?

Individuals with oculocutaneous albinism, type 1 (OCA1) have white hair, very pale skin, and light-colored irises because they have none, or very little, of the pigment melanin in
Advertisement
<< Stroke Gene Discovery Increases Hope for New Treatments
Maintain a Healthy Lifestyle with Holachefs New Update on A... >>

A recent study reveals that every single person on the earth had brown eyes until a genetic mutation occurred around 10,000 years ago.

More News on:
Pregnancy and Antenatal Care The Magic Feeling of Being A Mother Neonatal Abstinence Syndrome Loss of Taste Mastocytosis