Baby Boom Encouraged by Cerne Abbas Giant - So They Believe 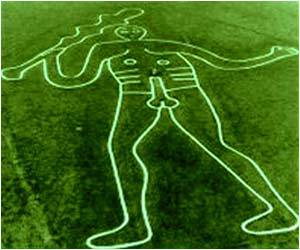 The legendary figure of fertility, the 180ft Cerne Abbas Giant in Dorset, UK, has encouraged the region around to have the highest birth rates in Britain - so the locals believe!

According to the data from the Office of National Statistics, the women of North Dorset have on average three children each - almost twice the national average and nearly three times as much as the city dwellers of Westminster.

In the past locals used to erect a maypole on the earthwork and childless couples danced around it to promote fertility.


Legend has it that a woman, who sleeps on the figure will be "blessed with fecundity", and infertility may be cured if a couple has sex on top of the figure, especially the phallus.

Infertility is a condition wherein couples fail to achieve pregnancy or if the woman has been unable to carry a pregnancy that results in a live birth.
Advertisement
Katie Raine, a nursery manager, said the increasing number of toddlers at the Archway Nursery in Pimperne - which is in sight of the Giant - were living proof of the findings.

"We can take 73 children in any one day and we're absolutely chock-a-block," The Telegraph quoted her, as saying.

Raine added: "We have a baby unit for five infants, and that's booked until next year, so there's definitely a baby boom on."

The findings, for which 10,000 North Dorset women aged between 15 and 44 were surveyed, placed the district at the top of the charts, leaving the London borough of Westminster at the bottom, with just 1.16 children per woman.

North Dorset's fertility rate beats the highest recorded national average in the UK, when figures recorded in 1964 revealed women were likely to produce 2.93 children in a lifetime.

Ireland On a Baby Spree - Biggest Boom in a Century

The number of babies born in Ireland last year was the highest since 1896, according to new figures published Monday.
Advertisement
<< Emergency Care Fails to Identify Suicidal Behaviour
Despite Religious Crackdown, Malaysian Muslims Continue to ... >>