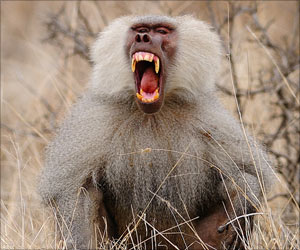 The size of the female's swollen rump may not matter as much for male baboons as previously thought. Instead of going for bigger posteriors, males prefer females who can bear them children, says a study.

Biologists have long thought that baboon males prefer females with bigger backsides as the mark of a good mother. The new study found that big-bottomed females were no more likely to attract mates than their smaller-bottomed counterparts. Instead, males preferred females that had more menstrual cycles since their last pregnancy.

"It is almost as if the males are counting," said researcher Courtney Fitzpatrick from Duke University.


"Our study suggests that, at least in part, males follow a rule along the lines of 'later is better' rather than 'bigger is better,'" Fitzpatrick noted.
Advertisement
Like humans, female baboons do not start ovulating again right away after having a baby. Things usually return to normal, when their infant starts weaning, but until that time they are less likely to get pregnant.

Baby readiness means more to males than an ample derriere. Rather than size, it seems that males use the number of postpartum cycles as a cue to gauge their likelihood of making a baby, the study noted.

Baboons breed throughout the year, and mating occurs during times when a female's behind is swollen -- a sign that she may be ovulating.

Fitzpatrick studied the behavior of wild baboons in southern Kenya and she measured variation in female swellings.

Measurements from 34 females revealed that some females swell more than others.

The researchers combined these size measurements with long-term data on each female's offspring. They found that females with bigger backsides do not necessarily make better mothers, as evidenced by the fact that females with fuller fannies did not produce more surviving infants.

The study appeared online in the journal Animal Behavior.

Premenstrual Syndrome
Premenstrual syndrome or PMS is a medical condition characterized by a range of physical and emotion...