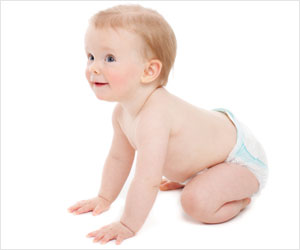 Rehabilitation of patients recovering from spinal cord injury and children with cerebral palsy could be improved by understanding how babies take their first steps, said a new study.

Anyone who has held a baby near to the floor and seen the child 'walking' around has caught a glimpse of our inborn instinct for walking. This primitive stepping reflex is the foundation on which children build an independent walking motion.

Dr Nadia Dominici leads a group at VU University, Netherlands, investigating the neural patterns underlying the development of locomotion. "We look at the emergence of walking behaviors in both human babies and infant animals, as they develop," she explains. "We are showing that humans and other terrestrial animals learn how to walk in surprisingly similar ways."


The group has shown that movements such as walking are created from the flexible combination of a small set of groups of muscles that simplify the control of locomotion, called 'locomotor primitives'. Dr Dominici expands on this, saying: "We found that human babies are born with just two walking primitives: the first directs the legs to bend and extend; the second commands the baby's legs to alternate -- left, right, left, right -- in order to move forward. To walk independently, babies learn two more primitives, which we believe handle balance control, step timing and weight shifting."
Advertisement
These primitives are unexpectedly alike throughout the different animals that the group has studied, as Dr Dominici explains: "Despite all of the differences in body structure and evolution, locomotion in several animal species could start from common primitives, maybe even stemming from a common ancestral neural network."

This knowledge could be significant in helping patients with walking disabilities recover some mobility. Dr Dominici has already had promising results in rehabilitating injured rats and has bigger plans too. "Results from the rat study show that it's possible to use neural primitives to improve walking in rats," she says. "We are now studying the applicability of this method to children with cerebral palsy and adults with spinal cord injuries."

Source: Eurekalert
Advertisement
<< Potential Therapeutic Target in the Fight Against Cancer
Is It Safe for Physicians to Prescribe Fewer Antibiotics? >>

Mobility Plays An Important Role in Kids With Disabilities
Physical activity has important physiological benefits for children, but it also is a vehicle ......

External Brain Stimulation Improves Mobility in Parkinson's Patients: Johns Hopkins
In some people with Parkinson's disease, dopamine neurons generally die on one side of the brain, .....

Stress Likely to Cause Irreversible Weathering in Body
Young adults who come from adverse backgrounds and achieve a higher social status are more likely .....

Free Software to Make Computer Use Easier for Those With Motor Disabilities
A new invention by the University of Washington scientists will help people with motor disabilities ...

Surprising Health Benefits of Post-meal Walking
Walking after a meal helps in the faster transit of food from the stomach into the small intestine a...