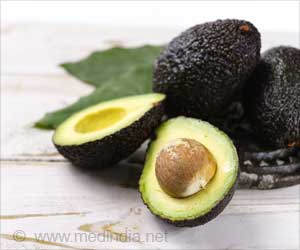 Anti-inflammatory compounds in avocado seed extract may provide additional avenues for development of a functional food ingredient or pharmaceuticals, reports a new study. The findings of the study are published in Advances In Food Technology and Nutritional Sciences.

An extract from the seeds of avocados exhibited anti-inflammatory properties in a laboratory study, according to Penn State researchers, and it represents a potential source for novel anti-inflammatory compounds that could be developed as a functional food ingredient or pharmaceuticals.

Advertisement
‘Extract from avocado seeds contains anti-inflammatory compounds that could be developed as a functional food ingredient or pharmaceuticals to fight diseases such as cancer, heart diseases, arthritis, colitis and many more serious conditions that are commonly associated with chronic inflammation.’
Read More..

The research team developed the extract over the last decade as a food colorant, and it is not known whether the compounds responsible for the extract's vibrant orange color play any role in its ability to inhibit the production of pro-inflammatory mediators, noted Joshua Lambert, associate professor of food science.

Lambert believes the study lays the groundwork for more research because it provides evidence that there are bioactive compounds in avocado seeds that have anti-inflammatory activity.

"The level of activity that we see from the extract is very good," he said. "We saw inhibitory activity at concentrations in the low microgram-per-milliliter range, which is an acceptable amount of activity to justify further studies."

The discovery could be important because cancer, cardiovascular diseases, arthritis, colitis, and many more serious conditions are associated with chronic inflammation, explained Lambert, whose research group in the College of Agricultural Sciences conducted the study. He pointed out that the findings, published in Advances In Food Technology and Nutritional Sciences, are especially encouraging because avocado seeds presently go to waste.

"If we can return value to avocado growers or avocado processors, that would be a benefit," he said. "And if we can reduce the amount of this material being dumped in landfills, that would be a good thing, given the huge amount of avocados that are consumed. This is encouraging because there is a market for other high-value sources of bioactive compounds we have tested in my lab, such as cocoa and green tea - whereas avocado seeds are essentially considered to be garbage."

Also involved in the research was Deepti Dabas, a doctoral degree student in food science, and Gregory Ziegler, professor of food science.

The research team has filed a patent application for the use of the extract as a food color additive. In 2016, Lambert, Ziegler and two partners founded a company, Persea Naturals, to develop the extract for this application. The identification of potential beneficial biological activity, if it is borne out in subsequent studies, may add value to the extract and provide additional avenues for development.

Avocado Extract Could be a Natural Additive to Prevent Food-Borne Illness
A compound extracted from the seeds of avocado called enriched acetogenin extract (EAE), is ......

Why Should You Eat Avocado Everyday?
Avocado increases lutein levels in the eyes and the brain and improved working memory and ......

Fresh Avocado Improves Absorption of Essential Nutrients for Healthy Living
Consumption of a fresh avocado with an orange-colored sauce or raw carrots is thought to enhance ......

Grape Seed Extract May Prevent Onset of Alzheimer's
Grape seed polyphenols, a natural antioxidant, may help prevent the development or delay the ......

Avocados
Did you know how healthy avocados are and how they can benefit you during your pregnancy, control di...

Health Benefits of Chia Seeds
Chia seeds have made a splash in the health industry and are now considered to be a superfood. This ...

Health Benefits of Poppy Seeds
Poppy seeds are rich source of many vital nutrients. Know more about its health benefits and nutriti...