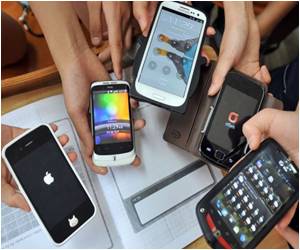 A typical college student plays with his or her digital device an average of 11 times a day while in class, reveals study.

According to a new study by a University of Nebraska-Lincoln associate professor, more than 80 percent admit that their use of smart phones, tablets and laptops can interfere with their learning.

We use them to text, tweet, post and, sometimes, make a call. Now, smartphones are helping with public health research. A recently published smoking cessation
Advertisement

More than a fourth said that their grades suffer as a result.


Barney McCoy, an associate professor of broadcasting, embarked upon his study after launching his teaching career seven years ago and noticing the instructional challenges presented by students' digital devices.

Kiwis really can't get enough of their smartphones, connecting them to work 24 hours a day, suggests a new study.
Advertisement
From the front of his classroom on multimedia, he often saw the smart phones creeping out.

The view from the back of a classroom while a colleague taught Mass Media Principles was equally telling.

"They've got their laptops open, but they're not always taking notes. Some might have two screens open-Facebook and their notes," McCoy said.

Rather than rely on anecdotal evidence, McCoy decided to try to quantify how often college students tune out their instructors in favor of tweets and texts.

During fall 2012, he surveyed 777 students at six universities in five states about their classroom use of digital devices for non-instructional purposes.

McCoy said he was surprised by one response: 79 percent of the students said they used their digital device to check the time.

The most commonly cited disadvantages were that they don't pay attention (90 percent), miss instruction (80 percent), or get called out by their instructor (32 percent).

More than a fourth said they lose grade points because of their digital habits.

The study ias published online in the Journal of Media Education.

Smartphone App to Put an End to Binge Eating

Binge eating has now been recognized as a mental health issue in the category of eating disorders.
Advertisement
<< Link Between Blood Sugar and Cognitive Function Identified
Diabetes Drug Along With Chemo and Radiation may Improve Ou... >>