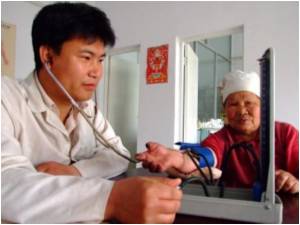 Authorities in eastern China covered up an outbreak of cholera for 12 days out of fears that publicising the often fatal disease would shock the local population, state press said Sunday.

According to the website of the Anhui province health department, 38 people have contracted cholera since August 16 and the outbreak was under preliminary control with the numbers of cases diminishing.


Cholera causes serious diarrhoea and vomiting, leading to dehydration, and can be fatal if not treated quickly. It normally breaks out in impoverished regions with poor sanitation.

Interactive section of Medindia gives details regarding waterborne disease
Advertisement
Although health authorities have not reported any deaths, Internet chatrooms were abuzz with rumours that several people have died from the disease.

At the same time state media criticised the government for covering up the epidemic and refusing to alert the local population.

"On August 16, the Anhui centre for disease control had confirmed the outbreak of cholera, but it was not until August 28 that it was publicised," the Beijing News said in an editorial.

"The government covered up the outbreak for 12 days."

The paper quoted Wang Jianjun, the vice director of the Anhui centre for disease control as saying that local officials were powerless to publicise disease outbreaks and had to wait for approval from more senior officials.

"Besides, if every outbreak of disease is publicised every time, this will easily lead the public to become paralysed in their thinking," the report cited him as saying without elaboration.

The cholera outbreak has been traced to soybean milk shop in Anhui's Mengcheng city.

Poor sanitation and a lax food safety regime have repeatedly led to health scares in China.

Also last week a cooking oil company in central China acknowledged it had waited five months before notifying the public that one of its products had been found to contain excessive carcinogens.

In one of the biggest scandals, huge amounts of the industrial chemical melamine were found in 2008 to have been illegally added to dairy products to give the appearance of higher protein content.

The scandal was blamed for the deaths of at least six infants and for making 300,000 others ill in China.

Giardiasis is an infection of the small intestine caused by a parasite called Giardia lamblia .
Advertisement
Advertisement