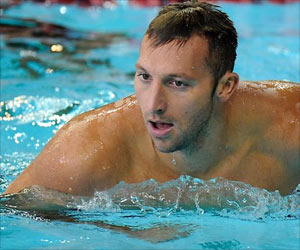 Ian Thorpe, one of the most popular Australian swimmers, has revealed about his struggle with depression.

He has won five gold medals at the 2000 Sydney and 2004 Athens Games. But in 2014, he was admitted to a rehabilitation center after being found disoriented on a Sydney street.

Mieko Nagaoka finished a 1,500 meters swim in one hour, 15 minutes and 54.39 seconds. As Japan's oldest swimmer, she holds 24 world records in swimming.
Advertisement
‘Australian Swimmer Ian Thorpe revealed that he has battled mental health problems since teenage and feels happy for overcoming it.’

He has been battling depression from childhood but has not revealed about it to his loved ones. Recently, he has become a part of a campaign backed by Kate Middleton, Young Minds Matter that aims to raise awareness of children's mental health problems.


"I am someone who has struggled with mental health issues since I was a teen. From the outside, many would not see my pain nor be able to relate to the sometimes-daily struggle I was facing. This is part of the deception of depression and also mental illness: what may appear at face value is a stark difference from the agony that lies within," Thorpe wrote in a blog post.

The Royal couple visited Harrow College in North West London on October 10, to speak with students about the importance of mental health issues and awareness.
Advertisement
He also revealed in the blog that he wanted to be a hermit and shut himself from the world. He underwent treatment for depression and felt tremendously happy for it. Thorpe now encourages adolescents to recognise and confront any mental health issues.

"If you concede to your illness and accept its reality you fall into the trap of not only being depressed but also taking on the depressed mindset," he said.

"Even though I may at times struggle with depression, I've decided I don't want it to define me. Although it may have taken me a while to get to this point and realization in my life, I assure you it's worth it. I realize the wonder of the world and I approach each day with an enthusiasm that I haven't felt for what seems like an eternity," he added.

Baidya lost both his legs at the age of nine, but his passion for swimming and zeal to achieve something earned him worldwide attention.
Advertisement
<< 19 People Succumb to Swine Flu in Finland
Childhood Exposure to High Levels of Lead Linked to Violent ... >>

Stressful life events such as job loss, accident, death of a loved one can trigger major depression in one person, but not in another.