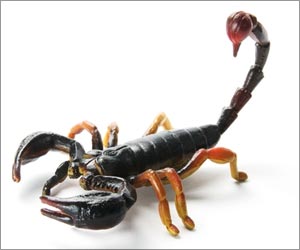 Unique compounds present in the venom of Australian scorpions have the ability to alleviate pain and therefore can be used in pain management drugs, find researchers.

Bryan Fry from the University of Queensland's school of biological sciences along with his teammates caught and milked 1500 Australian scorpions, including Victoria's wood scorpion, black rock scorpion and marbled scorpion, the Sydney Morning Herald reported.

The scientists then established the chemical composition of each type of venom, some of which have proved unique in structure and sequence.


Fry said that because these scorpions have been isolated in Australia for so long, their venom is very different to the venom that has been intensively studied for scorpions elsewhere in the world, making them very novel bio-resources.

Scorpion venom has the ability to identify pain receptors in humans.

The researcher said that once they identify how they are causing the pain they can use it to treat pain.

The study was published in the journal Toxins.

Scientists Explore Link Between Painkillers and Depression
Long-term use of pain-reliving medications like opioid analgesics can lead to depression, find ......

New Homeopathic Drug From Scorpion Venom Holds Promise For Cancer
Scientists from Cuba are trying to find a cure for cancer with a homeopathic drug prepared from the ...