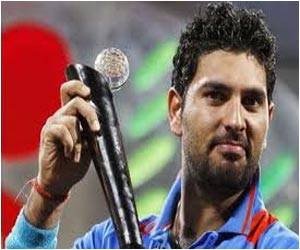 The first 20 copies of Yuvraj Singh's memoir 'The Test of My Life' will go up for bid on Collectabillia.com's newly launched auction portal at 9.00 a.m. The memoir chronicles the cricketer's battle against cancer following the euphoria of the 2011 World Cup.

Collectabillia, along with Random House, is offering fans an opportunity to own the first 20 autographed copies long before the book hits the stands. Bids open at Rs.5,000.

The limited edition books will also include a handwritten letter by the Arjuna Awardee and proceeds raised from the week-long auction will be donated to the YouWeCan Foundation.


Sharing an insight on the book, Yuvraj said, "I have always believed in fighting hard, and not giving up and through this book, I hope to encourage the thousands of others, who are facing similar challenges, to not give up. I also want them to know they are not alone in their fight."

Source: IANS
Advertisement
<< 'I Don't Want to Die. Please Don't Let Me Die' Were Hugo Ch...
Research Explains Why Some People Continuously Indulge in B... >>

Yuvraj Singh Joins Hands With Apollo Hospitals to Launch Cancer Screening Drive
Despite returning to international cricket Yuvraj Singh has not forgotten his battle with cancer...

Yuvraj Singhs Fight Against Cancer to be Aired on National Television
Yuvraj Singh's successful battle against cancer, starting from the moment he was diagnosed with the ...