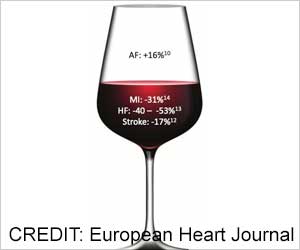 Atrial fibrillation is a condition with irregular heart rhythm. Be aware of the prescribed drugs, their side effects and precautions, to avoid risk to life.
Advertisement
‘Drinking even a small glass of alcohol a day can put individuals at increased risk for atrial fibrillation’
Read More..


Atrial Fibrillation is a condition where the heart beats in an abnormal rhythm. A European study showed that people who regularly drink a modest amount of alcohol are at increased risk for atrial fibrillation.

Information on 107,845 people from European countries of Sweden, Norway, Finland, Denmark, and Italy was analyzed. The participants joined the study between 1982 and 2010, and their average age was 48 years (ranging from 24 to 97 years) at the time of enrollment. They underwent medical examinations when they joined and provided information on their medical histories, lifestyles (alcohol and tobacco consumption), employment and education levels.

Findings showed that drinking even just one alcoholic drink a day was linked to a 16% increased risk of atrial fibrillation, compared to drinking no alcohol at all. The follow-up time of the study was at an average of nearly 14 years for all. More than 75% of participants consumed up to one drink a day. One alcoholic drink is characterized as containing 12 g of ethanol, equivalent to a small glass of wine (120 ml), a small beer (330 ml), or 40 ml of spirits.

Heart failure can increase atrial fibrillation, and people who consume large amounts of alcohol regularly are at increased risk of developing heart failure. Studies have also shown a slightly higher risk of heart problems for people who never consume alcohol and a reduced risk for people consuming a modest amount. This risk increases the more alcohol is consumed, creating a 'J' shaped graph.

Professor Renate Schnabel led this study and found that a similar reduction in risk was not seen for atrial fibrillation, suggesting that the increased risk of atrial fibrillation among those who drink small amounts of alcohol was not related to heart failure.

Prof. Schnabel said "To our knowledge, this is the largest study on alcohol consumption and the long-term incidence of atrial fibrillation in the community. Previous studies have not had enough power to examine this question. However, they have shown a relationship between alcohol intake and other heart and blood vessel problems, such as heart attack and heart failure. In our study, we can now demonstrate that even very low regular alcohol consumption may increase the risk of atrial fibrillation."

"These findings are important as the regular consumption of alcohol, the 'one glass of wine a day' to protect the heart, as is often recommended, for instance in the lay press, should probably no longer be suggested without balancing risks and possible benefits for all heart and blood vessel diseases, including atrial fibrillation." he adds.