Athletes Can Continue To Play Even After Total Shoulder Joint Replacement

A new study suggests that athletes can continue their career even after shoulder joint replacement.

The American Orthopaedic Society for Sports Medicine (AOSSM) claims that even an older individual receiving a total shoulder joint replacement can make a comeback in active sports within approximately six months of surgery.

In their annual meeting, the lead author of the study Gregory N. Drake from Fondren Orthopaedic Group, Texas Orthopaedics Hospital said: "In our study, approximately 94 percent of the patients who have a total shoulder arthroplasty or joint replacement, were able to return to sports and 85 percent were able to return to the type-specific sport they were involved in before the surgery."


The researchers analyzed a database of all unconstrained total shoulder arthroplasties, conducted by a single surgeon between July 1, 2004 and September 30, 2007

They made their report after sending a questionnaire to 304 patients, out of whom 165 responded.

It was observed that 87 of the respondents regularly participated in sports prior to surgery, and the average age of the patients was 68.5 with an age range from 47-93.

The researchers regulated the patient's activity for a minimum of one year, after they went through a surgery.

They noted that by the six-month point in the rehabilitation, the patients' shoulder gained strength against any consequence of sport activity, such as a deceleration injury when a golf club hits the ground or a fall during a tennis match.

Drake said: "Eighty-eight percent of the individuals in our study returned to their activity levels for periods greater than 30 minutes per session with the same type of intensity. It also appears that the most likely reason for returning to the same level of participation is dependent on the motivation of the individual. Athletics can be a great motivator for surgery and an even greater one for patients to stick to a rehabilitation schedule."

Now Joint Replacement Does Not Take Long Recovery Process
Replacing a joint in any part of the body often leads to a long recovery process and the possibility of not being able to return to a sport or activity.
READ MORE

Dislocated Shoulder
A dislocated shoulder is an injury which causes your upper arm bone to slip out of its socket.
READ MORE 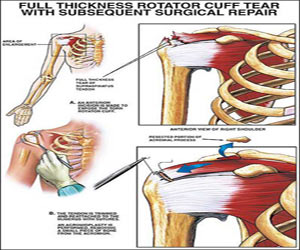 Rotator Cuff Injury
Rotator cuff injury can be a tendinitis, a strain, or a tear of the rotator cuff muscles. The rotator cuff is made up of four tendons that fuse to surround the shoulder joint.
READ MORE