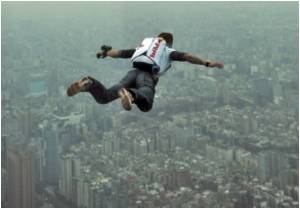 At 89 years, D-Day veteran Jock Hutton jumps from a plane at 5,000 feet on Thursday in his own unique act of commemoration for this week's 70th anniversary.

"At my age life tends to get a wee bit boring. So you've got to grab at any chance at excitement!"

The Scot landed in the same field outside the Normandy village of Ranville where, as a member of the 13th Battalion of Britain's Parachute Regiment, he was part of the first wave of troops taking part in the Allied invasion of continental Europe.


In a concession to Hutton's advanced age, Thursday's skydive was undertaken in tandem with a member of the Red Devils, Colour Sergeant Billy Blanchard.
Advertisement
But it was ten times higher than when he landed 70 years ago.

"They (the Red Devils) made me feel very relaxed but I wanted to get out of that door!" Hutton said.

"We dropped very low (on D-Day). We didn't have as much time in the air as we did just then. We smashed into the ground ... my tailbone is now my collarbone!"

The pair touched down on the grass just in front of Prince Charles, who waited for the veteran to compose himself before stepping forward to shake his hand.

As colonel-in-chief of the Parachute Regiment, the heir to the British throne has led the tributes Thursday to those in the first wave of air landings shortly after midnight on June 6.

Hutton jumped out of a Cessna Caravan at the start of an hour-long parachute display involving almost 300 British, American, French and Canadian troops.

Their jellyfish-like chutes filled the blue skies above Ranville, in conditions that, contrary to predictions earlier this week, were much better than they were on that history-making night seven decades ago.

"It was quite dark then, we couldn't see where we were going," Hutton recalled.

"It was raining slightly and the moon was bursting out of the clouds, so that was a welcome to France."

After his hard landing, the paratrooper had to make his way across the field laden down by kit weighing 40 pounds (18 kilogrammes).

But this seasoned soldier, who after the war served for four decades with the Rhodesian SAS, bridled at suggestions he had been scared.

"During my lifetime, sir, I have never been terrified," he said. "I'm just a vicious little Scotsman."

Watching, or rather not watching, as Hutton descended from the sky was his wife Doreen and several other veterans.

"She turned her back on it," Hutton said. "It has been 44 years of service and she is naturally a bit bored of it all.

After D-Day, Hutton was involved in the Battle of Normandy until June 22, when injury forced him to return to Britain.

After recovering, he returned to the western front and advanced with his battalion through France to the Netherlands.

Base Jumper Survives 60-metre Fall With Failed Parachute
A base jumper survived a 60-metre (200-foot) plunge from an Australian bridge Sunday despite his ......

Here is a Restaurant That 'Parachutes' Meals to Customers
In this age of innovation, a Melbourne eatery has come up with a new way of delivering meals to ......

Teen Girl Cheats Death Despite Parachute Malfunction at 3,500 Feet
A 16-year old girl from Texas suffered the worst nightmare of any sky diving enthusiast when her ......