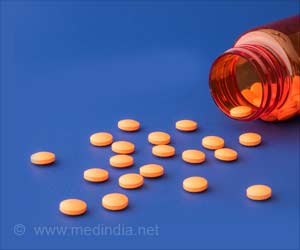 Aspirin reduces colorectal cancer risk by half in patients at high genetic risk, according to a new study.

Long-term results of an international multi-center trial CAPP2 showed that 600 mg of aspirin daily reduced colorectal cancer risk by half compared to those on placebo.

Eight hundred and sixty-one genetically susceptible patients were randomized to have either aspirin or placebo for 2-4 years and followed up for 10-20 years. Of those on aspirin, 40 had colorectal cancer, while 58 of those on placebo got colorectal cancer during follow-up.


The results are statistically interpreted that aspirin reduced the risk by about 50%, and the efficacy lasted for 10-20 years after taking the medication, says Professor Jukka-Pekka Mecklin from the University of Jyväskylä and Central Finland Hospital District.

The finding is similar to what has been observed after large cardiovascular studies performed in general population previously.

Tens of thousands of patients had aspirin in placebo-controlled trials to prevent cardiovascular events. After reviewing the data afterwards, those on aspirin had significantly less colorectal cancer than those on placebo, says Mecklin.

The participants of the current study were identified carriers of Lynch Syndrome. They carry a gene that causes a defect in DNA mismatch repair. Lynch syndrome is the most common predisposition for cancer, the prevalence of which is 1:250 in general population. Most are unaware of their genetic condition.

Lynch Syndrome gene have often cancer at young age, most often in bowel, womb, bladder, ureter or biliary tract. Genetic testing is beneficial to provide surveillance and targeted prevention to those at risk. If there are multiple cancer in the family at relatively young age (50-60 years), or some individuals have had several cancer in these organs, the relatives should seek for genetic counselling, Mecklin advises.

High doses of aspirin may cause bleeding and gastric ulcer, which the reason the CAPP research group is currently conducting another study with three different doses (100, 300 and 600 mg daily).

The results were published in a distinguished medical journal The Lancet. From Finland, 149 participants, and researchers from Central Finland Central Hospital, University of Jyväskylä, HUS and University of Helsinki, contributed to the study.

Health Benefits of Willow Bark
Find the benefits and facts of willow bark, nature's own alternative to aspirin. It is healthy, effective and absolutely natural.
READ MORE