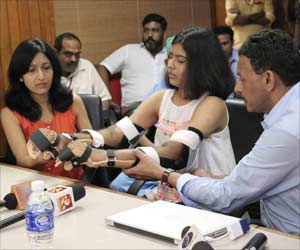 A 19-year-old girl who lost both her hands in a road accident last year has finally received the upper arm double hand transplants by Amrita hospital's medical team.

Shreya Siddanagowda, chemical engineering student of Manipal Institute of Technology, is the only daughter of Suma Nuggihalli and Fakirgowda Siddnagowders. Shreya received both hands from Sachin, a deceased 20-year-old college student who suffered a fatal head injury after a motorcycle accident.

On September 2016, on the way back to her college, the bus overturned crushing both her hands on the spot. Due to severity of the accident, Shreya's hands had to be amputated from the elbow level.


Shreya was devastated and was emotionally shaken. Four months later, she began using the prosthetic limbs, but was unhappy as these did not allow her to do most of the basic tasks.
Advertisement
For the Asia's first upper-arm double hand-transplant, Dr. Subramania Iyer, HOD of Plastic & Reconstructive Surgery, Amrita Hospital, led a team of 20 surgeons and a 16-member anesthetic team in a surgery that lasted 13 hours.

After the surgery, the surgeon exclaimed that the upper arm transplants were more challenging than those performed at the wrist or forearm level. He said that it was because of the complexity involved in identifying and connecting the corresponding nerves, muscles, tendons and arteries that adds to the difficulty.

Shreya's body has successfully accepted the donor's hands and is also showing good signs of recovery. "Shreya is currently undergoing a regime of movements for her fingers, wrists and shoulders. The elbow movements are planned to be started in a couple of weeks. We expect that she will regain 85% of hand function in the next one-and-a-half years," said Dr Mohit Sharma, who along with Dr. Ravishankaran played lead roles in the surgery.

Shreya has been discharged from the hospital with a follow up intensive physiotherapy and rehabilitation programme.

On seeing the transplanted hands, she was very grateful to Sachin's family and claimed to be feeling great. She also said that given some years time she hopes to lead a near normal and happy life, she also wants to continue her studies and fulfill the dreams that she had before the accident.

In addition to this remarkable surgery, Amrita hospital has completed three successful hand transplants in the past 3 years, with two of the patients already on jobs.

Zion Harvey, 8, World's First Child to Receive Double Hand Transplant: US Doctors
A happy and outgoing child, Zion cannot wait to throw a football with his new hands after doctors .....

Worlds First Double Hand Transplant in 10-Year-Old Boy A Success
The youngest recipient who had a double hand surgery 2 years ago is now able to use his hands to ......

First Double Hand Transplant Surgery In UK
King, who is 57, is the second person to have a hand transplant at Leeds, and the first to have ......