Asia Is Competing With US And British Universities 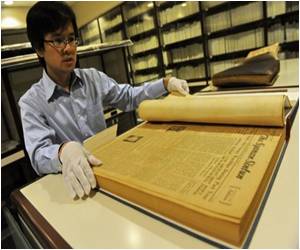 An influential education rankings report reveals that US and British universities continue to dominate in academic excellence but Asia is catching up fast.

The California Institute of Technology kept its top spot in the Times Higher Education World University Rankings for 2012-2013 which also saw the University of Oxford rising two positions -- ahead of Harvard -- to jointly share second place with Stanford University.

A new study has found education and socioeconomic status can affect life expectancy of people, in spite of overall improvement in healthcare.
Advertisement

The United States retained the overall number one spot with 76 of its universities securing a place in the top 200 institutions, followed by Britain.


The University of Cambridge slipped one place to seventh while the Imperial College London held on to the eight spot.

France has seven institutions in the top 200 compared to five last year.

The Dalai Lama Says Holistic Education the Need of the Hour

The Dalai Lama stressed on the importance of holistic education to ease stress and frustration of modern life. The Dalai Lama is the Tibetan spiritual leader.
Advertisement
A closer analysis of the rankings, however, showed many US and British institutions losing ground in contrast to Asia.

Universities in China, Singapore, Taiwan and especially South Korea witnessed a surge in performance in what was described as evidence of a power shift from the West to the East.

Dirk Van Damme, head of the Innovation and Measuring Progress Division at the Organisation for Economic Cooperation and Development (OECD), said: "Academic excellence is gradually shifting away from the 20th-century centres. The US and the UK still dominate the absolute summit, but they face a severe loss of total position in the top 200 list."

The ranking system warned of Britain slipping into global mediocrity within a generation due to funding cuts, higher tuition fees and rising global competition.

"Huge investment in top research universities across Asia is starting to pay off. And while the sun rises in the East, England faces a perfect storm," he added.

The Times used 13 performance indicators to evaluate more than 700 universities including on research, teaching, knowledge transfer and international outlook.

Three decades ago when Hsu Chung-hsin went to university, he became part of a small elite in Taiwan.
Advertisement
Advertisement
This site uses cookies to deliver our services.By using our site, you acknowledge that you have read and understand our Cookie Policy, Privacy Policy, and our Terms of Use  Ok, Got it. Close
×