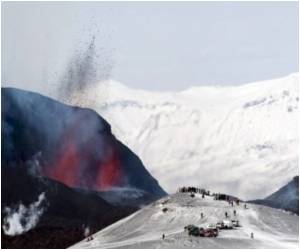 The finding could be exploited to build detectors to warn pilots when they are flying into danger.

A pall of gloom had descended over the traveling class the world over as a volcano erupted in faraway Iceland. Flights were grounded, and travelers were stranded indefinitely.
Advertisement

Giles Harrison of the meteorology department at the University of Reading in the UK said that the disruption to European air traffic last month caused by the ash could have been reduced if pilots had an instrument that could detect ash clouds.


On 19 April, when Eyjafjallajokull's cloud hung over Europe, the researchers released a weather balloon carrying instruments to measure particle size and concentration, and the electrical charge in the atmosphere, from a site on the west coast of Scotland.

Scottish health authorities warned people Thursday to beware of possible health problems from ash falling to the ground over northern Britain following a volcano eruption in Iceland.
Advertisement
As the balloon entered the 800-metre-thick ash-laden layer of the atmosphere, they noted a rapid increase in particle concentration and a positive electrical charge that they say could not be attributed to local weather conditions or other sources.

"We think that particle collisions must be creating the charge," New Scientist quoted Harrison as saying.

The charge increased with particle concentration, reaching a maximum of around 0.5 picocoulombs per cubic metre in areas where there were 50 particles per cubic centimetre of air.

That is around 1/20th of the concentration beyond which the UK Civil Aviation Authority (CAA) has said aircraft are not allowed to fly.

"Combined with other measurements, a simple charge detector on an aircraft should be able to alert pilots to dangerous levels of ash," said Harrison.

However, it is not yet known if such a system would be of practical use in busy airspace.

"UK airspace is very congested, so any detection system has to be able to warn of the ash far in advance, to give time to manoeuvre safely," said a spokesperson for the CAA.

The study has been published in the Journal Environmental Research Letters.