As Students Are Hard to Come By, Taiwanese Universities Decide to Merge 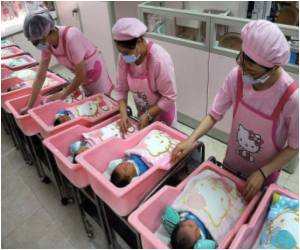 Taiwan has decided to allow public universities to merge as student numbers continue to shrink due to one of the world's lowest birth rates, an official with the education ministry said Tuesday.

Government data indicate that nearly 7,000 Taiwanese couples were expected to tie the knot in New Year weddings on Saturday -- a 20-year high for a single day.
Advertisement

Two planned mergers, one of them involving the leading National Taiwan University, are likely to go ahead after parliament passed a bill Monday allowing colleges to team up to better utilise resources, said the official.


The bill came after a recent forecast predicted that about 60 colleges out of the island's current 164 could close down by 2021 due to a severe shortage of students.

Albert Liu, CEO of Taipei-based company Gamania, has nothing to worry about if being successful in online gaming is as hard as going to the North Pole.
Advertisement
Currently, around 300,000 high school graduates are eligible to apply for college each year but the number is expected to drop to 195,000 in 2021, according to the forecast.

The authorities have launched various initiatives to boost the island's fertility rates, including a massive plan to offer $1.3 billion a year in birth incentives and childcare support from 2012.

Survey Says Most Childless Taiwanese Have No Parenting Plans

A survey has found that most childless Taiwanese have no plans of parenthood even though the vast majority believe that a dwindling birth rate is a serious issue for the island.
Advertisement
<< FDA Issues New Warning on Painkiller Causing Liver Damage
Mandatory Folic Acid Fortification Has Improved Folate Leve... >>

As Students Are Hard to Come By, Taiwanese Universities Decide to Merge Personalised Printable Document (PDF)