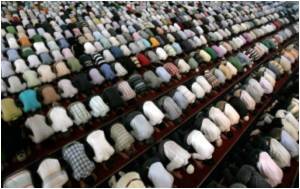 The music has been cut and the dancing has stopped -- Dubai's usually boisterous nightclubs are falling silent as the Muslim holy month of Ramadan approaches.

Many of the city's night spots were subdued Monday night while others had shut their doors altogether, even though the fasting month has yet to begin.

Egypt has always been a preferred destination for rich Arab tourists, who find the climate salubrious and the entertainment interesting.
Advertisement

"You usually find dozens of taxis picking up people to and from clubs in the late night hours, but tonight no one's going because of Ramadan," a taxi driver told AFP.


The biggest nightclub in Dubai, the Lodge, was shut while another popular club, Barasti, showed little sign of its usual vibrant night life, with patrons sitting quietly sipping on their drinks.

A new study by scientists in the United States has revealed that pregnant Muslim women who fast during Ramadan are likely to have smaller babies who will be more prone to learning
Advertisement
"We serve alcohol after sunset, but no music and no dancing at all," said waiter Ibrahim Khan.

But some customers did not seem to mind. "Why would we find fault with that? We're living in their country and under Islamic laws, why would we complain?" said Chris Kinsvill-Heyne, a British expatriate who has been working in Dubai for more than 10 years.

However, an employee at a construction company who gave his name as Vijay M. wasn't too happy with the restrictions.

"It's definitely discouraging. This place is usually very lively and you'd find people dancing but as Ramadan is coming, it's already quiet in here. What's the point of coming if there's no music and no dancing?"

"I think I'll be spending the rest of the evenings at home with friends," said Vijay.

John Patrick, a British tourist, said that local customs should be respected.

"If it's out of respect for the country's culture then music should be turned down and we should be fine with that," he said.

"Luckily, we're leaving tomorrow," he added with a smile.

At the usually bustling Media One hotel, a barrier is being erected to hide from public view the clubhouse in which alcohol is served.

"We will only be able to play low background music and we'll have to shield the club out of respect for Muslims in order not to expose them to alcohol," said waitress Dorothy Githinjil.

Ramadan begins in the United Arab Emirates either on Wednesday or Thursday, depending on the sighting of the new moon.

The Dubai government is emphatic that no public partying will be allowed during the month, when the faithful are expected to abstain from eating, drinking, smoking and having sex during daylight and, in the evening, eat small meals and visit friends and family.

"It is not permitted to hold entertainment activities, celebrations, or parties at any time throughout the holy month of Ramadan," the government said in an August 2 circular.

"In exceptional cases, religious rhymes, children programmes as well as holding poetry sessions and educational competitions are allowed," it added, however.

Consumption of alcohol in the United Arab Emirates is officially allowed only for licensed non-Muslims. But in practice, anyone can consume alcohol at licensed hotels and clubs.

"There are tourists and non-Muslims in the country and they can go to closed bars in which they can be served alcohol," director of Dubai government's inspection and tourism permit section, Mohammed Kahlifa, told AFP.

"Any nightclub can be transformed into a normal bar serving food and drink without the loud music," Khalifa said. "Low background music using string instruments is allowed."

An employee at Mawal, a Lebanese restaurant famous for its daily entertainment programme, complained that "business will fall" during Ramadan.

"There'll be no entertainment, we will lose business by 50 percent," the employee said, declining to be named.

"Usually people pay 300 dirhams (around 82 dollars) for the programme which includes male and female singers and a belly dancer. Let alone the drinks which are also expensive."

"Now all we can do is serve Iftar for 140 dirhams (38 dollars) per person," the employee said, referring to the meal with which Muslims traditionally break their fast after sunset.

Hotels and restaurants usually compensate for the loss by setting up "Ramadan tents" in which visitors gather to spend the evening dining, puffing on nargileh water-pipes and playing backgammon and card games.

"We are setting up a tent for Ramadan. A band will play light oriental music every evening," a receptionist at Jumeirah Beach Hotel told AFP.

Health of Diabetics at Risk During Ramadan

Diabetic Muslims in the Netherlands are putting their health at risk by ignoring medical advice to take part in Ramadan.
Advertisement
<< Philippines Hopes to Strike Gold at Gambling
20pct Aussies Hurl Abuses, Become Addicted to Alcohol >>