Amid warnings that child deaths from swine flu are spiking, toddler Bronwen English nervously clutched her teddy bear and waited to be innoculated against the H1N1 virus Friday.

"She's in an age group that has seen a much higher proportion of deaths and complications from H1N1 flu. And her mother's pregnant, so we are very concerned about it coming into the house," Bronwen's father Chad told AFP just as his daughter's anguish at being vaccinated got the better of her and spilled over into tears and sobs. 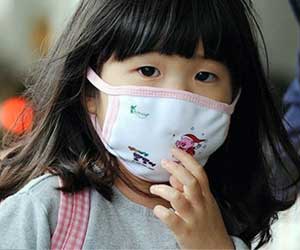 A young girl wears a face mask to protect herself from contracting swine flu, at Los Angeles International Airport 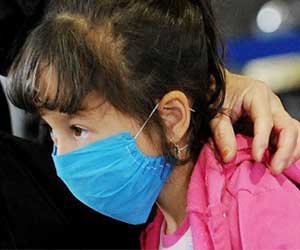 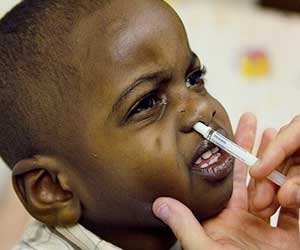 Bronwen and her dad were among hundreds who had turned up at a nondescript clinic in this Washington suburb to be innoculated against swine flu on the first day the vaccine was made available to the general public in Maryland as part of a massive nationwide vaccination campaign.


As Bronwen waited to be vaccinated, the Centers for Disease Control and Prevention (CDC) announced that child deaths from swine flu were 'shooting up" in the United States, with 19 deaths from influenza reported in recent days.
Advertisement
"We're now up to 76 children having died from the 2009 H1N1 virus," said Anne Schuchat, a senior official at the CDC.

"To put that in context, in the past three years, the total pediatric influenza deaths ranged from 46 - 88. We've already had 76 children dying from the H1N1 virus and it's only the beginning of October," Schuchat said.

The flu season in the United States runs from August to March; the three previous seasons did not have concurrent outbreaks of seasonal and H1N1 influenza.

Ernesto Magadnan, a Mexican immigrant who has lived in Silver Spring for 20 years, had come because "I hear last week that a friend in Mexico died of this problem."

The new strain of H1N1 flu was first reported in Mexico in April. By June, it had spread around the world and was declared a pandemic by the World Health Organization.

Some 2.4 million doses of nasal spray vaccine made of greatly weakened, but live, H1N1 virus were delivered this week to state and local health authorities around the United States.

By 7:00 am, dozens of people were waiting in the car park of the Silver Spring clinic, where 2,500 doses of vaccine were available. The free innoculation session was scheduled to begin at 9:00 am.

The would-be vaccinees had ignored what Schuchat called "myths" about the live virus in the nasal spray -- stories that those who were innoculated with it would shed the virus for days and could even fall ill.

They had also set aside fears that the clinical trials of the vaccine had been rushed.

"The indications are that the live virus vaccine is fine for Bronwen's age group," her father Chad English told AFP.

"We don't have any fears about the vaccine, but we certainly have fears of not getting her vaccinated," he said.

Children are among five groups deemed to be at particular risk from the novel swine flu virus.

The free vaccinations at the Silver Spring clinic were available only to children aged two to 18, adults up to age 49 who look after infants younger than six months old, and health care workers up to age 49, nurse Roger Cesaro told the long line of people outside the clinic at 8:45 am.

All had to be free of any chronic health conditions such as asthma or diabetes, and could not have had a nasal spray seasonal flu vaccine or any other live-virus vaccine in the past 28 days, Cesaro said.

Inside the clinic, fluorescent yellow signs that said "vaccinations" in English and Spanish pointed to a small room, where 10 "vaccinators" waited.

When her turn came, Bronwen buried her face in her dad's chest, refusing to face her vaccinator.

She took a deep breath and watched as her teddy was vaccinated, the tears stopping as she was reassured by older children -- and by teddy's stoicism -- that the procedure was painless.

But then came her turn, and as another toddler screamed nearby, Bronwen joined in the cacophony -- and helped US health officials move a step closer to their goal of administering 250 million doses of swine flu vaccine by year's end.

Swine Flu - Prevention
The swine flu in humans is most contagious during the initial week of the illness....

Protecting Kids from Swine Flu
The death of an 11-year-old girl in the US on Tuesday from suspected flu-related complications has ....

Children Should be Among First to Get Swine Flu Vaccine: Study
Children should be among the first people to be vaccinated against swine flu if health officials ......