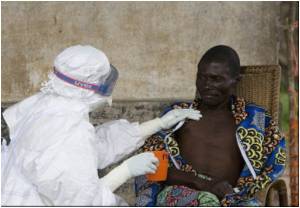 John Ejiofor, a Nigerian, pleaded the world to help contain the spread of the Ebola virus raging across west Africa. He was standing just a few hundred meters from the Lagos Hospital, where a Liberian man died.

"Nigeria is in a serious mess," the 40-year-old electrical engineer told AFP. "We lack the capacity to deal with the situation."

Residents of Lagos, sub-Saharan Africa's largest city with more than 20 million people, returned to work Wednesday after a four-day break to mark the end of Islam's holy month of Ramadan, a public holiday across the country, even in the majority Christian south.


It was the first workday morning in the bustling mega-city since authorities confirmed that the worst-ever Ebola epidemic -- which has killed more than 670 people since March in Guinea, Liberia and Sierra Leone -- had reached Nigerian soil.

Liberian President Ellen Johnson Sirleaf revealed a number of steps to contain the outbreak, including stringent medical checks at airports and major trade routes have been put in place.
Advertisement
Patrick Sawyer, an employee of the Liberian finance ministry, is thought to have contracted the virus from his sister before travelling to Nigeria for a regional conference.

The 40-year-old died in quarantine Friday at a hospital next to the Obalende market, where Ejiofor sat in his car on Wednesday, voicing concern over Nigeria's response to the outbreak.

"If there is an Ebola epidemic in Nigeria today, our health authorities will be too overwhelmed... The government has to work with the World Health Organization (WHO)," to stop the virus from spreading, he said.

Elizabeth Akinlabi, a 30-year-old schoolteacher milling around Obalende, agreed, saying that days after the Ebola death was confirmed, the government's response remained lacklustre.

"A lot of people still do not know about the existence of the disease, not to talk of taking measures to prevent it," she told AFP, urging the WHO "to come to the aid of Nigeria".

Calls for outside help are not common in Nigeria, Africa's most populous country, which has a very low foreign aid reliance thanks to massive earnings from its oil industry, which produces roughly two million barrels of crude per day.

But in the economic capital Lagos and other cities, people have little reason to trust the public healthcare system, especially in the face of a potential crisis.

Many public hospitals are acutely understaffed and ill-equiped. Some do not have generators, a must in a country with multiple power cuts each day.

Compounding the current problem is a strike over pay launched on July 1 by all doctors employed at public hospitals.

A crisis meeting by the striking Nigerian Medical Association held at the weekend in light of the Ebola outbreak failed to end the work stoppage.

Most Lagosians pay out of pocket for private healthcare at clinics ranging from the enormously expensive -- staffed by doctors with degrees from prestigious Western medical schools -- to cheap, ramshackle clinics run by nurses with questionable credentials.

The special advisor on health for the Lagos State government, Yewande Adeshina, acknowledged how lucky it was that Sawyer was taken to First Consultants, a professionally-run private clinic in the upmarket Ikoyi neighbourhood.

"I'm grateful to God that was the hospital he went to," she told the private Channels television station. "Because I'm not sure that a lot of our hospitals were truly prepared."

Nigerian officials have sought to limit panic since announcing Sawyer's death, but mixed messages from the federal health ministry and Lagos state officials have caused confusion among the media and public.

Health Minister Onyebuchi Chukwu had to retract a statement claiming the Liberian arrived on July 22, after Lagos authorities said he landed on July 20.

Chukwu had insisted that Sawyer was brought directly from the airport to a hospital, leaving him "no time to mingle in Lagos" and infect others, but the accuracy of that statement has been questioned amid the dispute over timelines.

The minister further claimed that Nigeria had contacted and was monitoring all passengers on the ASKY airlines flight that originated in Togo's capital Lome and brought Sawyer to Lagos.

Abdullahi Nasidi of Nigeria's Centre for Disease Control later indicated that only a handful of the passengers had been found so far.

For Francis Atufe, a 36-year-old banker and father of two, the government's apparent struggle to manage the situation was "worrisome," and, like others in the Obalende market, he voiced hope that foreign experts would deploy across Lagos in numbers.

An American doctor who has contracted the dangerous Ebola virus in Liberia is weak and quite ill, a colleague of his told AFP.
Advertisement
<< Study Shows Impact of Soft Drinks in Our Meal Planning
New Blood Test may Help Detect, Prevent Neural Tube Defects >>

Pan-African airline ASKY announced the suspension of flights to and from the capitals of Sierra Leone and Liberia, both hit by an outbreak of the Ebola virus.
Advertisement
News A-Z
A B C D E F G H I J K L M N O P Q R S T U V W X Y Z
What's New on Medindia