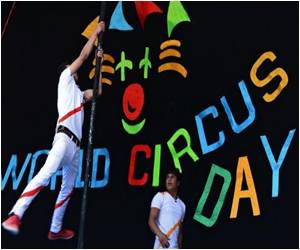 Artists associated with India's circus industry have expressed their distress over a ban on the use of wild animals. They are claiming that half of the circus companies have shut their operations.

The recent hike in diesel prices and a power crisis has also taken a toll.

Pavithran, a circus artist and in charge of Gemini Circus, said, "People have lost interest in the circus. Due to a ban on use of wild animals by the central government. Entertainment through media and television is another reason why circus is losing out on audience. People prefer visiting circus at a central location."


Pavithran said only the government, as that would help in the revival of the circus.

Gemini Circus is taking care of at least 200 artists, elephants and other animals.

During a performance in Coimbatore, artists mesmerized the spectators with a wide array of acts ranging from gymnastics to dare devil antics.

The animals were also a part of the show besides juggling and fire poi.