Artificial Jelly Fish Could Help Save Patients With Heart Disease 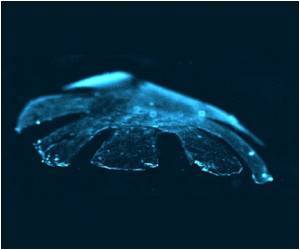 Lab-engineered jelly fish with the heart of a rat may mend a broken heart, say scientists.

The exploit marks an advance in so-called biomimicry, in which a natural wonder inspires copycat innovation in the lab.

The interest in the jellyfish lies in its remarkable swimming ability, which comes from muscles that open its bell-like body and then contract it, thus ejecting water and driving the creature along.


This pump-like design has been honed by more than 500 million years of evolution to be as simple and energy-efficient as possible.

As a result, it offers tempting insights for scientists hoping to make small, reliable heart pumps for the future.

The risk factors that work behind the scene before a heart attack are familiar to many. But do you realize the extent to which your lifestyle choices are putting your life at risk? Can you identify a heart attack when it occurs? Take our quiz and find out.
Advertisement
"It occurred to me in 2007 that we might have failed to understand the fundamental laws of muscular pumps," said Kevin Kit Parker, a professor of bio-engineering at the Harvard School of Engineering and Applied Sciences.

"I started looking at marine organisms that pump to survive. Then I saw a jellyfish at the New England Aquarium, and I immediately noted both similarities and differences between how the jellyfish and the human heart pump."

The paper is published on Sunday in the journal Nature Biotechnology.

Dubbed "Medusoid" after the Medusa, the snake-haired creature of mythology that provides the Latin name for jellyfish, the lab creature has a body of an ultra-thin silicone polymer with eight limb-like appendages.

The arms are coated with a protein in patterns that resemble the muscle architecture of the real jellyfish.

The protein's job is to act as a nutritional scaffold to grow and direct a batch of cells derived from the muscles of rat hearts.

Thus primed for action, Medusoid was unleashed in a lab container of electrically conductive fluid.

The scientists threw a switch to put a tiny voltage, ranging from one to five volts, into the fluid to make Medusoid's muscle cells contract and relax rhythmically.

As they did so, the arms opened and closed like fingers on a clenching fist, propelling Medusoid around the tank.

"I was surprised that with relatively few components -- a silicone base and cells that we arranged -- we were able to reproduce some pretty complex swimming and feeding behaviours that you see in biological jellyfish," said John Dabiri, a professor of aeronautics and bio-engineering at the California Institute of Technology (Caltech).

"I'm pleasantly surprised at how close we are getting to matching the natural biological performance, but also that we're seeing ways in which we can probably improve on that natural performance. The process of evolution missed a lot of good solutions."

The natural jellyfish has also inspired "Robojelly," a US Navy-backed research innovation that was showcased in March.

It has eight appendages made of shape-metal alloy -- metals that remember their original shape after being scrunched up.

The appendages are coated with a platinum powder that reacts with the oxygen and hydrogen in seawater to create heat, which causes the segments to contract. When they cool down, they relax, thus ejecting the water and pushing Robojelly along.