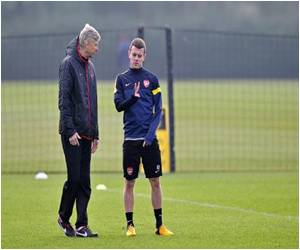 Arsenal manager Arsene Wenger will speak to England midfielder Jack Wilshere in a bid to get the talented Gunner to stop smoking.

Wilshere was photographed smoking a cigarette outside a London nightclub in the early hours of Thursday morning as players relaxed following their Champions League victory at home to Italian side Napoli on Tuesday.

Arsenal, the current Premier League leaders, travel to West Bromwich Albion on Sunday and Wenger said he intended to make his feelings known to the 21-year-old Wilshere before that match.


"I don't know really what happened, so I will need to have a chat with him about that," Wenger said at a news conference on Friday.

"There are two things -- first of all when you are a football player you are an example and as well you don't do what damages your health."
Advertisement
"The fact is that you can damage your health at home, you can smoke at home and you can drink at home, and nobody sees it, but when you go out socially you also damage your reputation as an example."

Many leading sportsmen have smoked, with Wenger's fellow Frenchman Michel Platini, one of the best footballers of his generation and now the president of UEFA, and rugby great Serge Blanco two examples.

However, Wenger -- in charge of London side Arsenal for the past 17 years -- said there was a major cultural difference in attitudes towards smoking in England.

"Yes of course things are different, in England especially," he said.

"You don't need to convince me because I must tell you, I travelled as a football player on coaches after games in France where you didn't see each other, there was so much smoke on the coach."

"Everybody smoked, but times have changed, and the healthy worry, the example, the role models from the football players request has changed as well."

"I must say as well, English society is very sensitive to smoking, much more than France, more than southern (European) countries, so it is a bit more shocking here than it is somewhere else."

England international Wilshere spoke of wanting to improve his own game after starting on the bench against Napoli in a match where club record signing Mesut Ozil scored his first Arsenal goal and set up a second for Olivier Giroud as the Gunners scored twice in the first 15 minutes and won 2-0.

Wilshere is in England manager Roy Hodgson's squad for the upcoming World Cup qualifiers against Montenegro and Poland.

Wenger, who has seen Wilshere struggle with injuries including an ankle problem, is in no doubt of how much the players means to both club and country.