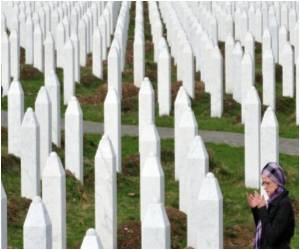 The descendants of Martiros Muradyan cherish the few objects like religious relics which he was able to carry with him when he fled the mass killings of Armenians by Ottoman forces a century ago. The hand-made rugs and wooden spoons in their home in rural Armenia are the last physical reminders they possess of a life that was long ago torn apart.

But while the material links decay, as Armenians gear up to mark Friday 100 years since the start of what they term a genocide, memories of the tragedy are still being kept vividly alive from generation to generation.

"I know every detail of the history of the terrible slaughter," said Muradyan's 17-year-old great-granddaughter Ruzanna. "About the inhuman march along the road of death and about how my great-grandfather and his friends held off some Turks so that 12 families could escape."


Guarding the stories of suffering has become a treasured task for those who survived the World War I slaughter, especially given the decades of dispute that have swirled over the issue. Armenians say up to 1.5 million of their kin were killed between 1915 and 1917 as the Ottoman Empire was falling apart and have long sought to win international recognition of the massacres as genocide.
Advertisement
Turkey rejects the claims, arguing that 300,000 to 500,000 Armenians and as many Turks died in civil strife when Armenians rose up against their Ottoman rulers and sided with invading Russian troops. "I remember how in the evenings all the kids around would gather outside our house and listen with open mouths to grandfather's stories about how the Turks killed the Armenians," says Muradyan's grandson Hovhannes. "He never tired of telling it and we never tired of listening."

Now that most of those who experienced the killings first hand have died, it is their children and grandchildren who are keeping the memory alive. "I made sure my children know what my father told me and so will their children," says Muradyan's son and Ruzanna's grandfather, Mnatskan, 84. "It's our duty, every Armenian's duty -- to know, to remember."

For Armenia, the recollections of the events are enshrined in the school curriculum, culture and memorials. Across the country, villages bear the names of the communities in what people still call "Western Armenia", modern-day eastern Turkey, that long ago vanished from the map.

"The memory of genocide is as vivid today as a century ago," prominent Armenian psychologist Khachatur Gasparyan told AFP. "It is being transmitted from generation to generation at the Armenian history lessons in schools, through literature and films, but primarily by word of mouth, in families. The memory shapes the Armenian national identity."

In the capital Yerevan the most obvious symbol of the genocide is the towering memorial overlooking the city that draws hundreds of thousands each year to mark the anniversary of the start of the tragedy.

"The fact that over the past decade Armenians, regardless of age, gender, or political belief, flock to the memorial to the victims of the genocide on April 24 shows this has become a part of our consciousness, it is already a genetic memory," said Gasparyan.

For the Muradyan family there is also one other reason why they can never forget what happened to their ancestors, the view out of their window. From their home on a clear day they can see the glistening snows of Mount Ararat.

It was from a village on the slopes of that mountain that Martiros Muradyan fled in 1915, seeking refuge first in Iraq before settling in the village where they now live. Now Ararat is in Turkey and for Armenians, the biblical mountain -- where Noah's Ark is supposed to have come to rest -- is a sacred symbol of their nationhood and loss.

For Martiros Muradyan, it was a constant reminder of what he had been forced to leave behind. "He talked in such detail about his village, about his home that it seems that I could find my house with my eyes shut," his son Mnatskan said. "To the end of his days my father looked at Ararat with longing and never stopped dreaming that one happy day he would see his home again."

Now, this summer, 100 years after Muradyan left with his few possessions, his descendants are planning to make the trip to Turkey to visit their native village. There they plan to scrape up some of the earth he once trod and sprinkle it on the grave where he finally came to rest.

"He dreamt of returning there all his life," Ruzanna says of her great-grandfather. "I'll go there, to his native land, and his soul will rejoice."

Genocide of Native American Population A Possibility: Mutilated Human Remains Discovered
A new study revealed that the Native American population was wiped out by genocide that took place ....

Uneasy Peace for Rwandans Living With the Killer Next Door
After the genocide that claimed over 800,000 lives in Rwanda 20 years ago Rwandans are now ......

Smells can Evoke Powerful Emotional Memories
Smells can revoke powerful and emotional memories from the past more efficiently in comparison to .....