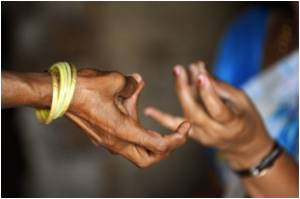 Leprosy or Hansen's disease may be passed onto humans by armadillos, found in the southern United States, claim researchers in a new study.

Led by Richard Truman of the National Hansen's Disease Program in Baton Rouge, Louisiana,  researchers used DNA testing to prove that a strain of Mycobacterium leprae not found anywhere else in the world was present in 28 out of 33 wild armadillos and 25 out of 39 U.S. patients who lived in areas where the animals lived.

The bacterium Mycobacterium leprae manifests itself in skin lesions it also affects peripheral nerves, the eyes and the mucosa of the upper respiratory tract. But most people are immune to it and only repeated exposures makes a person get leprosy. And then it can only be cured by a long-term regimen of the antibiotics dapsone, rifampicin and clofazimine.


Earlier studies had established that armadillos carry the leprosy bacteria, for people who lived in areas where armadillos are common, mostly Texas and Louisiana, were affected although they had not come into contact with others who had the disease. The strain of leprosy known as 3I-2v1, was identified in five southern states, suggesting that it moves quickly between armadillos and moves from the animals to humans.  The armadillos prove to be ready hosts to the bacteria because of their lower body temperature of 89 degrees F.

New research has revealed that a genetic variant which cuts the risk of contracting diseases such as tuberculosis and leprosy is present among populations with long histories of urban living.
Advertisement
Researchers say frequent contact with the animals, or cooking and consuming armadillo meat should be prohibited.

The study has confirmed that environmental reservoirs can be important in the transmission of leprosy, and other species in other parts of the world could be carrying the bacteria.

Experts believed that the armadillos contracted the bacterium from humans who came to the New World from Europe and Africa. And now, they are returning it to humans.

Calculate Ideal Weight for Infants The Essence of Yoga Indian Medical Journals Hearing Loss Calculator Loram (2 mg) (Lorazepam) Drug Interaction Checker Sanatogen Iron Intake Calculator Nutam (400mg) (Piracetam) Diaphragmatic Hernia
This site uses cookies to deliver our services. By using our site, you acknowledge that you have read and understand our Cookie Policy, Privacy Policy, and our Terms of Use