Are Neckties Making a Comeback ? 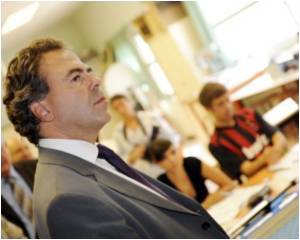 Neckties seem to have made it to the wardrobe of the stylish young.

"I never wear one," Antoine Arnault, the 34-year-old son of luxury tycoon Bernard Arnault told AFP on the sidelines of the first ever menswear show by the LVMH-owned shoemaker Berluti -- where ties were a full part of the look.

"Except on Monday afternoons when I have appointments with my father. If I didn't have a tie I'd be the odd one out."


On Saturday, his father was tie-less as he sat front row at the Dior Homme show -- a fact that did not go unnoticed by the fashionista crowd. "It's the weekend," whispered one.

A Berlin museum blended haute couture and haute cuisine, where octopus tunics, seaweed miniskirts and chocolate dresses seized the limelight.
Advertisement
Silence descended on the vast domed tennis club, as the first suited model stepped out with a tie, dark and slim, like the majority of the looks sent out by the house's young Belgian designer Kris Van Assche.

Ties were similarly ubiquitous at Hermes or Raf Simons -- where there was a twist, with the necktie trapped between two shirt collars layered at different heights.

And where there were no ties there was often the suggestion of one -- in a strip of silk scarf visible under the collar at Paul Smith, or a crossed kimono-style silk shirt at Louis Vuitton.

Karl Lagerfeld for one never steps out without a tie.

"I have worn one all my life -- starting at school," he told AFP after the Dior Homme show. "I can't stand people looking dishevelled -- especially after age 35!"

Because age is critical when it comes to the tie.

"For a few years now older men, businessmen have started going without a tie to look younger," the luxury industry consultant Jean-Jacques Picart told AFP on the sidelines of Kenzo's menwear show, which worked a generous helping of ties into a look billed as urban, cool and "on the go."

"So it's only normal for young people to reclaim them"

The problem with going tie-less, said Picart, is that most shirts are designed for a tie. You have to choose a collar that buttons very high on the neck for it to look right -- and there are not many of those out there.

Plus, past a certain age, the "neck can look a bit scrawny -- a bit like a chicken or turkey's neck" -- a powerful argument in his view for putting the tie back in its place.

At Lanvin on Sunday there were no ties until the finale, but there were neckties for all the evening looks -- save for a single bow-tie, a nod to the personal style of designer Alber Elbaz.

"Ties are a part of the suit that is coming back," Elbaz confirmed. "Not the ties of our fathers or grandfathers. They are worn by a new generation that comes from sport, new technologies.

"It's neither the world of the dandy nor of the boardroom."

Catholic faithful, for 700 years have articulated veneration to the Virgin Mary by creating an elaborate wardrobe for the mother and child, displayed on a new exhibit in Lyon, France.
Advertisement
<< Special Pump Could Prevent Cardiac Related Deaths
US Hospitality Industry Discriminate Against People With Di... >>

Tea Falling Out Of Fashion With Youngsters Below 25